Arts in a time of social distancing | News | Almanac Online |

Arts in a time of social distancing 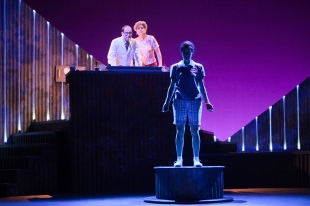 TheatreWorks Silicon Valley plans to livestream shows of "They Promised her the Moon," the company's latest production that was originally set to run through March 29 at the Lucie Stern Theatre in Palo Alto. Photo by Kevin Berne.

The local arts scene is, like most sectors, being hit hard by the COVID-19 pandemic. Cancellations of concerts, plays, book talks and galleries are impacting everyone, and many artists are hoping to find innovative ways to reach out and share art during this time of social distancing and sheltering at home.

Wondering if there's a way to stay connected and help keep the scene alive? Look to the social media accounts of your favorite musicians, actors, writers, dancers, authors and artists of all kinds to keep up with their projects and find ways to support the arts from a distance.

And to the parents with children at home, look for children's musicians offering songs and movement classes, and for authors, illustrators and bookshop staff offering drawing lessons and storytimes online, including Chris Saccheri of Los Altos' Linden Tree Books. He is hosting storytimes via Facebook Live thrice weekly and book clubs via Zoom.

"We really miss seeing kids in the store, sprawled out on the floor or curled up on their parents' laps reading books," Saccheri told the Weekly. "These storytimes help us stay connected with those families and spread some warmth and fun during these uncertain times."

"Each week we will explore a topic/prompt, have a conversation, and attempt a collaborative activity, like group audio programming (what could go wrong?) or maybe mass humming over Zoom (where everyone can sound equally lo-fi!). We will have virtual fireside chats with guests, and we will take time to check-in with one another," he wrote in an email to followers. Those interested can sign up at artful.design/tv.

Local theater mainstays Max Tachis and Roneet Aliza Rahamim, along with actor Maria Marquis, are hoping to offer entertainment, to keep their spirits up and the creative juices flowing and raise awareness and support for local arts organizations. They're holding a Facebook Live public event on Friday, March 27, starting at 8 p.m. during which they'll perform dramatic scenes and sketches and hold virtual rounds of pub trivia.

"The current plan is using video conferencing to do two-to-three-person scenes that everyone reads from their home, but all of us are on the screen, 'Brady Bunch'-style," Tachis told the Weekly on Tuesday.

Since bars are now closed, Tachis said they'll also offer pub trivia questions for viewers to play along with at home.

"I'm trying to write a bunch of sketches that take place in video conferencing, and we'll figure it out from there," he said.

In between the entertainment, he and his co-creators will highlight various arts organizations that may be struggling right now due to canceled events and encourage people to donate if they can.

"I think it will be something along the lines of a variety show that's done digitally," he said.

Tachis and Rahamim were both in the cast of Hillbarn Theatre's production of "Laughter on the 23rd Floor," which closed after one preview performance on March 12, before opening night. "We got one really nice audience in there," he said.

Though doing livestreams and videos doesn't make up for the cancellation of a show they worked tirelessly on, it does help combat the feelings of loneliness and disconnection that come along with social distancing.

Tachis said he's seen a lot of interest from theaters and other types of artists either already releasing new content via social media or planning to do so in the future.

TheatreWorks Silicon Valley announced via press release Wednesday that it is finalizing a version of its canceled play, "They Promised Her the Moon" (recently reviewed by the Weekly), to stream for ticket holders, who will receive a link via email. "TheatreWorks is looking into providing streaming access for the general public with a pay-what-you-will ticket price — more information will be announced at a later date," the release states.

"I think people are going to start doing a lot of this kind of stuff," Tachis said. "I think we'll see quite a bit more."

Find comprehensive coverage on the Midpeninsula's response to the new coronavirus by Palo Alto Online, the Mountain View Voice and Almanac here.

Singapore's oldest cafe was about to open in Palo Alto. Then, the coronavirus hit.
By Elena Kadvany | 1 comment | 4,381 views