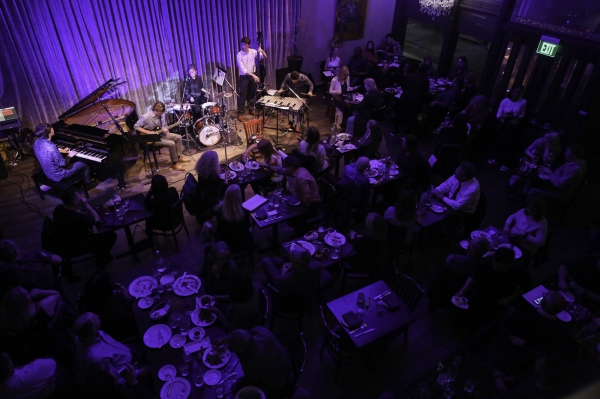 Special to The Almanac

Five heads bob in unison, keeping to the beat. Eyes alternatively look inward, searching for the next note, or beyond, glancing at the other musicians to see who's going to solo next.

The song is "Summer Wind," a jazz standard the boys play from memory at their weekly band practice at a member's home in Portola Valley.

The song choice represents wishful thinking for these Woodside High students who make up a professional jazz band called Indygo Rhythm Section, because it's only March and summer is a long way off.

This month the band was on course to be crazy busy, just when the four seniors, Christopher Badger, Dominic Constantz, Max King and Gavin Carlson, are waiting to hear where they will go to college in the fall. But cancellations due to the coronavirus threat have slowed the pace.

Constantz was to play guitar, and sophomore band member Sebastian Najbjerg was to perform on the drums for Woodside High's musical, "The Addams Family," scheduled for March 13 to 21 but canceled before opening.

The quintet had also booked gigs at two venues for later this month: On March 25, the Indygo Rhythm Section was set to make its first appearance at the Park James Hotel in Menlo Park, but that event was canceled last week because of the public health crisis that is shutting down most public events and arts venues. It is unknown whether a March 29 date, which would have marked the group's 14th performance at Savanna Jazz in San Carlos, will take place.

Savanna owner/musician Pascal Bokar first heard the boys play at Silicon Valley Jazz Festival in the fall of 2018. He liked them so much he offered them a chance to perform at his club the last Sunday of every month, and bookings have taken off from there.

In 2019 the band gave more than 30 performances, sometimes appearing for free, such as at the Veterans Administration Hospital in Palo Alto last fall, or for the price of admission at Angelica's in Redwood City earlier this month. Otherwise the group charges $500 to $750 for private parties, fundraisers and corporate events.

That's on top of the band's regular practices at lunchtime at school and every Saturday in Portola Valley, amounting to about 10 hours a week.

Badger's father, John Badger of Portola Valley, serves as the band's manager when he's not working in the tech business.

The band's musical director, John McGrory of Menlo Park, is also in the software business, and is a professional trumpet player who directs the jazz band at La Entrada School.

McGrory used to run the jazz combo class at Woodside High, and that's where he met the boys and recognized their talent and potential. He suggested that they go out and form their own band.

The band's name suggests the color indigo blue and the blues form often heard in jazz.

Karl Nueckel was Indygo Rhythm Section's original drummer, but since leaving for college he only occasionally appears with the band as a guest artist.

The group has a repertoire of about 60 songs in a variety of styles ranging from swing and blues to Latin and funk; pianist Christopher Badger has written a couple of pieces that the quintet performs.

"We mostly take standards and interpret them in our own way," he says.

The boys were all new to jazz a couple of years ago, and now they find themselves listening to a lot of it and transcribing the music for their own purposes.

"I figure out the melody and chord progression," Max King says, explaining how he listens to a song and then breaks it down so he can play his part on an upright bass.

Yet every time the boys perform there's always room for improvisation and creativity as they key off each other with an encouraging nod or look.

As their manager says, "These guys have amazing chemistry."

Most of the boys play more than one instrument. Carlson started his musical career at age 5. He learned to play the vibraphone for the band, and admits, "the vibes are hard to play." But at this point he finds that "music is becoming second nature."

He was co-captain of the basketball team and is now playing golf for Woodside High.

Constantz has been playing music since he was 6. He's the guitarist and, sometimes, vocalist, and also fills in on drums. He was captain of Woodside's water polo team.

The band members also contribute their talents — some singing and playing instruments and others providing creative feedback — to recordings of electronic dance and alternative music that Badger has composed and produced under the alias names Krakn and Christopher Normann. So far the music has generated 8.5 million streams on online platforms such as SoundCloud and Spotify.

Badger hopes to continue focusing on his passion at his top school choice, Berklee College of Music in Boston.

In addition to the March gigs in Menlo Park and San Carlos, the quintet is booked for April 18 at Tabard Theatre in San Jose, May 2 at Freewheel Brewing Company in Redwood City, and Aug. 9 at San Jose Jazz Summer Fest. The band's schedule is posted on its website, indygorhythm.com.

The boys so enjoy hanging out and jamming together that they plan to continue playing as a band even after most of them graduate from Woodside. In fact, they are already accepting bookings for the summer of 2021.

"We're all really good friends. This is what we do — we play music together," King says.

Badger adds, "We'll be playing together for the rest of our lives."

Update: John Badger told The Almanac last week that when the shelter-in-place emergency order is lifted, the combo will be performing a benefit concert in support of Savanna Jazz, where it has played 13 times since January 2019. Go to indygorhythm.com/events for more information.

Singapore's oldest cafe was about to open in Palo Alto. Then, the coronavirus hit.
By Elena Kadvany | 1 comment | 4,453 views

A Pragmatic Approach to A Trillion Trees
By Sherry Listgarten | 4 comments | 4,116 views

Repairing a Disagreement with your Beloved & “Physical” vs. “Social” Distancing
By Chandrama Anderson | 2 comments | 2,780 views

The University of California’s flexible policies during COVID-19
By John Raftrey and Lori McCormick | 6 comments | 2,695 views