Toddling Through the Silicon Valley
by Cheryl Bac
What is School without Recess
Sep 25, 2020 | 0 comments

An Alternative View
by Diana Diamond
What I will remember about Ruth Bader Ginsburg
Sep 21, 2020 | 5 comments

"VistaCenterFoundationBenefit"
info incl in other photo caption Submitted by bobbi bon on Jul 25, 2017

Air hugs and weekly testing: Inside one private school's first day back at school

Wednesday, Sept. 16 was the first day of the new academic year at Synapse School in Menlo Park, one of 21 San Mateo County schools that have been granted waivers to reopen in person for elementary grades. Friday, 4:15 PM

Weather will pose a danger to Bay Area residents starting Friday with a higher risk for rip currents at beaches and increased wildfire risk starting Saturday, according to the National Weather Service. Thursday, 4:23 PM | 2 comments

Want to get to know your local candidates? Here's a calendar of election debates, forums

Director Jeff Orlowski's "The Social Dilemma," leaves no stone unturned as it dives into tech's ugly downside, from social media addiction to the spread of misinformation. Friday, 11:26 AM

Atherton's mayor is endorsing a challenger over a City Council incumbent over a controversial proposal to withdraw the town from the local fire district. The incumbent says his position on the issue is being mischaracterized. Thursday, 10:15 AM 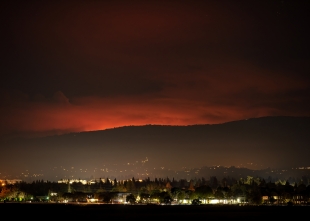 CZU Fires now 100% contained
The CZU August Lightning Complex Fires have been fully contained, as of a 9 p.m. announcement from Cal Fire on Sept. 22. As the fires progressed, The Almanac reported on the many ways that locals have aided in the fight against fire. Wednesday, 11:54 AM

As schools throughout California tiptoe toward reopening, decisions about whether to routinely test teachers, staff and even students for the COVID-19 virus are proving controversial -- and potentially costly. Wednesday, 10:35 AM | 1 comments

With new deal, communities seek to cement partnership on land use concerns

After banding over shared concerns about Stanford University's growth plan, city and county officials in Santa Clara and San Mateo counties are preparing to sign a "Land Use Compact" that would sustain the newly forged partnership. Monday, 1:35 PM | 1 comments

A man charged with killing two young women in the 1970s on Stanford University property has been hospitalized right before his trial was set to begin in San Mateo County. Tuesday, 11:41 AM | 1 comments

High schools will stay online for second quarter of the fall

Guest opinion: A helping hand for residents in need during COVID-19

Premarital and Couples: What Does Sex Mean to You?
By Chandrama Anderson | 0 comments | 2,541 views

What I will remember about Ruth Bader Ginsburg
By Diana Diamond | 5 comments | 1,804 views