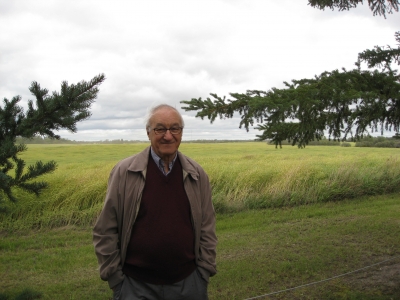 Albert Bandura died peacefully at his home in Stanford, California on July 26, 2021, at the age of 95. He was the David Starr Jordan Professor Emeritus of Social Science in Psychology at Stanford University.

Dr. Bandura was born in 1925. He was the youngest of six children, raised by a Polish father and a Ukrainian mother in the close-knit immigrant farming community of Mundare, Canada, located 50 miles outside of Edmonton, Alberta. He earned his undergraduate degree from the University of British Columbia in 1949 before going on to graduate school in psychology at the University of Iowa. While there, he met Virginia Varns of South Dakota and they married in 1952. After earning his Ph.D., he accepted a position at Stanford University in 1953, where he served on the faculty for 57 years.

Dr. Bandura had a prolific and illustrious career that profoundly influenced the field of psychology. His earliest research focused on the role of observational learning and modeling. In his famous 1961 Bobo Doll study, children who observed an adult beating up an inflatable doll, called Bobo, were more likely to reproduce the same aggressive behavior when later playing with the doll. His findings challenged the previously established behavioral doctrine that learning was primarily a conditioned response shaped by external punishments and rewards. He instead advanced a social-cognitive approach to learning. His further seminal research on modeling and guided mastery revolutionized the field of behavior change, led to new, highly effective interventions to treat debilitating phobias, and resulted in efforts to protect children from the negative effects of televised violence.

In the 1980s, Dr. Bandura formalized Social Cognitive Theory and introduced the concept of self-efficacy. His research and writings illuminated the powerful role that perceived self-efficacy—the belief in one’s ability to achieve desired outcomes—plays in motivation, perseverance, and behavioral change. His theory stresses that people are agents in their own development, and that enhanced efficacy beliefs facilitate the ability to grow, to achieve personal goals, and to alter life trajectories. These self-efficacy constructs have had far-reaching research and clinical applications and are used by parents, teachers, health providers and countless other professionals to create robust interventions to promote positive change.

More recently, Dr. Bandura’s work has focused on harnessing the power of social learning, modeling, and self-efficacy to address global issues such as climate change, social injustice towards girls and women, family planning, and public health crises. He collaborated with the Population Media Center to develop mass media programs and telenovelas, which are broadcast in targeted areas of the world. These dramas, created by people in the communities where they are produced, portray dilemmas that people face in their efforts to better their lives. They model practical solutions to help people make positive changes and have proven to be powerful vehicles for social change.

Dr. Bandura’s final book, Moral Disengagement: How People Do Harm and Live with Themselves, describes the psychological mechanisms employed by individuals, corporations, and government to persuade themselves and/or others that their actions are not harmful. His theory of moral disengagement exposes the tactics people use to justify a host of atrocities ranging from the bombing of civilians during wartime to the shameful promotion of Oxycontin by Purdue Pharma, the failure of Congress to enact common sense gun safety legislation, and sexual assaults committed by Catholic priests and others in positions of power.

Over the course of his long career, Dr. Bandura’s guiding motivation has been to foster practices that lead to human betterment and ensure environmental sustainability. He has had enduring relationships with colleagues and students who shared this journey with him, and he continued to respond to requests for information and guidance until the final months of his life.

Along the way, he received numerous honorary degrees, was elected president of the American Psychological Association in 1974, and earned awards from the APA in 1980 and 2004 for his outstanding lifetime contributions to psychology. In 2015 he received The Order of Canada, one of the country’s highest civilian honors, that “recognizes outstanding achievement, dedication to the community and service to the nation.” In honor of his important contributions to the advancement of knowledge in the fields of behavioral and social sciences, he was awarded the National Medal of Science by President Barack Obama in 2016.

Dr. Bandura loved living in California and enjoyed all that the state had to offer with his wife, Ginny, and their children. They camped and hiked in the High Sierra; explored the California coastline; sampled new restaurants offering the latest in California cuisine; savored fine wines in Napa Valley; and regularly attended music and performance events, such as the Carmel Bach Festival and SF symphony. He was an avid gardener, single-handedly tending to his yard and prolific vegetable garden until well into his 80s. A remarkable and generous man, he had a lively sense of humor and sparkling eyes, and he adored playing with his twin grandsons during their frequent visits while growing up.

Dr. Bandura is survived by his two daughters, Mary Bandura, Ph.D., of Tiverton, RI, and Carol Cowley, MSN-NP, of Louisville, CO, and grandsons, Timothy and Andrew Cowley, of Boulder, CO.

As per Dr. Bandura’s wishes, the family does not plan to hold a memorial service. In lieu of flowers, charitable contributions can be made to the Natural Resources Defense Council (https://www.nrdc.org/), the Population Media Center (https://www.populationmedia.org/), or Young Voices for the Planet (https://www.youngvoicesfortheplanet.com/).

Photo Gallery
0 photos Upload a photo
Remembrances
0 entries Submit a remembrance
Memorial service
As per Dr. Bandura’s wishes, the family does not plan to hold a memorial service.
Make a donation
In lieu of flowers, charitable contributions can be made to the Natural Resources Defense Council (https://www.nrdc.org/), the Population Media Center (https://www.populationmedia.org/), or Young Voices for the Planet (https://www.youngvoicesfortheplanet.com/).
About this site     Contact us