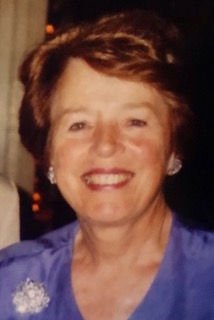 Anne Marie Quinn Kirkbride died peacefully in Santa Barbara, CA. Anne’s great sense of humor, warmth, even-temperament, loving kindness and optimistic view of life were inspiring and admired by all. She was so proud to be both Irish and Roman Catholic. She lived her faith and values daily and was devoted to helping others in her own community and beyond. She loved being a native San Franciscan, growing up in the fog of the Richmond District, attending Star of the Sea High School (1947) and San Francisco College for Women (Lone Mountain-1952). She then moved to sunny Greenbrae and even sunnier Menlo Park, CA for 50 years. She was a substitute teacher for the Menlo Park School District, and later a Kindergarten teacher at St. Raymond School where she was beloved by both students and parents alike. She enjoyed playing tennis, reading great books with her St. Raymond’s Women’s Book Club, in which she participated with dear friends for over 30 years. Anne was a Lector and volunteer at St. Raymond and Saint Denis Churches, as well as a tireless volunteer at her children’s schools and St. Anthony’s Padua Dining Room where she served food to those in need. Anne also relished her time as a docent at the Cantor Art Center at Stanford University for several decades.

Anne was a devoted wife to Tom until he passed away in 2014. In a letter to his parents before they were married he wrote: “This gal Anne Quinn I’ve been taking out recently is, I think, the finest all-around gal I’ve ever known. She has the best sense of humor and sharpest wit of any girl I’ve ever known. A really fine, exceptional type.” They met in Kaiserslautern, Germany where she taught dependents of U.S. Army personnel stationed in Germany after the war. Tom was in the U.S. Air Force based in Germany. They were married July 13th, 1957 and enjoyed a love affair that spanned 57 years.

As grandparents they enjoyed traveling to see their children and grandchildren just as much as traveling the world. Family and friends have so many fond memories of visits to their beautiful backyard to enjoy the pool -- always some jazz music playing. Anne and Tom ended most days sitting under the redwood trees in their backyard enjoying a glass of wine and watching the sunset.

Photo Gallery
0 photos Upload a photo
Remembrances
0 entries Submit a remembrance
Memorial service
All are invited to attend a celebration of Anne’s life on Friday, July 9th at St. Denis Church, 2250 Avy Avenue, Menlo Park. The service will be preceded by a rosary in the church at 9:30 am. Interment will take place at Holy Cross Cemetery, Menlo Park.
Make a donation
In lieu of flowers, memorial contributions can be made in Anne’s name to St. Anthony’s Padua Dining Room: paduadiningroom.com or mail donation to St. Anthony’s Padua Dining Room, 3500 Middlefield Road, Menlo Park, CA 94025 or St. Denis Church 2250 Avy Avenue, Menlo Park, CA 94025
About this site     Contact us