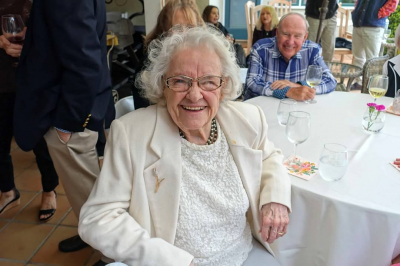 Betty Jean Lucke was born in Pittsburgh, PA on July 6, 1926. As a young girl, she moved with her parents to East Orange, New Jersey. Upon graduation from East Orange High School during World War II, she attended nursing school at St. Luke’s Hospital in New York City. Upon completion of the nursing program, she married Winston Lucke and moved with him to Boston where he completed his graduate degree and she worked for Massachusetts General Hospital. In 1949, they moved to California as part of the second wave of 49’ers and took up residence in Palo Alto. Before having children, she worked at the original Palo Alto Medical Clinic. She had three children: Nancy, Robert, and Susan, who she raised in Portola Valley. After her divorce in 1960, she opened a custom clothes and alterations business, originally operating the business out of her home and then in a small shop in Menlo Park. While raising her children, she was active in the 4-H organization as a parent leader. In 1976, she met Sam Renteria at a dance in Menlo Park and shared a relationship with him until his death in 1997. She retired and closed her business in 2005 at the age of 79. In retirement, she enthusiastically volunteered as an usher at the Mountain View Center for Performing Arts, where she received recognition in 2015 for 2137 hours of service. Her children were her pride and joy, each obtaining a graduate degree. A dedicated Democrat, she was not afraid to share her opinions. She was a voracious reader and enjoyed the theater, the ballet, cats and dogs and her bourbon and water. She leaves behind daughter Nancy Ludgus and son-in-law Lawrence Ludgus of Wilmington, DE; son Robert Lucke and daughter-in-law Teresa Hannah of Hinton, Alberta, Canada, and daughter Susan Lucke of Goleta, CA. The family would like to thank the caregivers at Sunny View Manor Care Center and Heartland Hospice Care. The family would like to extend a special thanks to long time family friend Jon Silver for the care and companionship he provided in her final years. Although she did not live quite as long as her father (who lived to be a month shy of his 105th birthday), she always said she had a good run and had no regrets. Services are private. Donations in Betty’s memory may be made to the Palo Alto Medical Foundation.