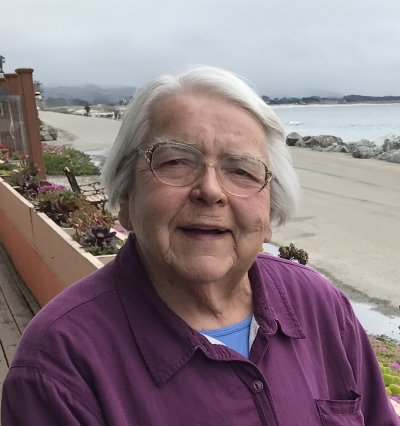 It is with great sorrow that we announce that Rev. Cora Scheel of Palo Alto passed away on December 31, 2022, at the age of 89. Cora was born on her family’s farm outside of Enderlin, North Dakota, and after completing nursing school in Fargo, Cora moved to Palo Alto where she worked as a nurse at Stanford Hospital. Later, she joined Syntex as a clinical research nurse, and completed a master’s degree at San Jose State. In her 50’s Cora made a third career change and became an ordained minister at Grace Lutheran Church in Palo Alto. Cora was passionate about connecting with people. Her travels took her all around the world—India, South America, the Galapagos Islands, East Africa, and more—but she always made time to make her annual drive across the country to visit her family in North Dakota. She formed and maintained decades-long friendships with many dear friends in California and was active in the lives of her great-nieces and great-nephew. Cora was predeceased by her brother Paul (Lois) and is survived by her brother Roy (age 100), his wife, Marie, and her nieces Sally, Sandra, Janet, and nephew Pete.

Photo Gallery
0 photos Upload a photo
Remembrances
1 entry Submit a remembrance
From Dorothy M Aronson
Jan. 19, 2023
A dear friend of 65 years with many wonderful memories of days gone by.
Memorial service
To honor Cora’s memory, her family and friends are holding a celebration of her life at Grace Lutheran Church in Palo Alto at 3:00pm on Saturday, January 21st. We invite anyone who knew Cora to come together and remember her wonderful spirit.
About this site     Contact us