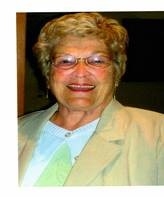 Dolores "Dodie" Alexander died March 20, 2019. She was a loving mother, grandmother, and great grandmother. She served as a co-founder, and then Executive Director, for the Community Health Awareness Council in Mountain View, California from 1973 to 1992. In 1982 she was awarded the Community Service Award, and in 1997 she was named by the Town Crier to the Honor Role of 50 Who Made a Difference. She is survived by her 5 children, her 8 grandchildren, and 1 great grand child. She was recognized by the California State Legislature for her many contributions to youth.

Photo Gallery
0 photos Upload a photo
Remembrances
1 entry Submit a remembrance
From Julie Levesque
April 18, 2019
We have so many special memories of Aunt Dodie; and always looked forward to the next visit to VT - love her like a second mom! She's back with Dick, and she is probably happy and healthy again. Love you!
Memorial service
Services will be on Saturday, April 27, 11:00 am, at Christ Church Los Altos, 1040 Border Rd, Los Altos, CA.
Make a donation
In lieu of flowers, the family is requesting that donations be made to the Community Health Awareness Council in Dodie's name. http://www.chacmv.org
About this site     Contact us