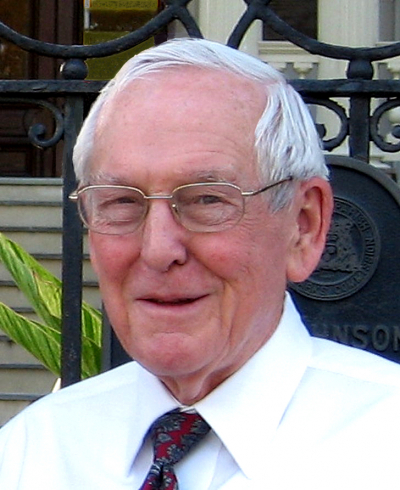 Donald Hanly Sweet passed away peacefully at age 98 on May 12, 2022 after suffering a stroke, less than three months after the passing of Beth Sweet, his beloved wife of 73 years.

Don will be remembered for his kindness, integrity, and intellect, and for being a loving husband and father. He will also be remembered for his warm smile, for organizing memorable family trips, for beautifully playing Gershwin pieces on the piano, and for the annual summer bounty of produce from his vegetable gardens.

Don was born in Bandon, Oregon. His family lived in a house overlooking Bandon Beach until September 26, 1936 when the entire town burned down in a fire. Even in his final years, Don never forgot this date. After the fire, his family moved to their ranch south of Bandon.

In the spring of 1942, Don graduated from Port Orford High School. There were nine students in his graduating class. In the fall, he enrolled at Stanford. A big change in his life!

World War II disrupted his college years. At the end of his freshman year at Stanford, Don enrolled in the Navy V-12 program and was sent to Cal Tech along with several other Stanford classmates. He completed his undergraduate education on an accelerated basis, earning a degree in Electrical Engineering within two years. He was then sent to Midshipman’s School at Cornell. Don was there when the war ended on V-J Day. After Midshipman’s School, he was assigned to the Naval Repair Base in New Orleans.

There he met Beth Greenwald at a Naval Officers’ ball, where she was serving as a hostess, and shortly thereafter they started dating. When he was sent to the Navy’s radar school in Georgia, Don continued to court Beth by letter and long-distance phone calls. After radar school he was assigned to serve in Pearl Harbor for the remainder of his time in the Navy. While there, he applied for admission to Stanford Business School. He returned to Stanford in the fall of 1946 and earned his MBA in June of 1948. Don and Beth were married in New Orleans on June 26, 1948.

After their wedding, they moved to Coos Bay, Oregon – to live near Don’s family. For the next decade they lived in Coos Bay and Bandon where Don worked in several family businesses in timber and banking. During these years, they made many lifelong friends as a young couple. There was no television, and their lives were full with picnics, potluck dinners, dances at the Elks Club, and bridge games with their friends.

In 1958, Don and his three siblings started a timber company in Point Reyes. Don and Beth moved to Marin County so Don could run the business. Tom, their youngest son, was born there in 1960.

The family timber business was closed in 1961 as part of the Federal government’s program to acquire land that is now part of the Point Reyes National Seashore. Following closure of the business, Don, Beth, and their four sons moved to Atherton later that year.

Don and Beth loved life on the Mid-Peninsula where they spent the rest of their lives. They made many new friends and re-established friendships made during Don’s years at Stanford.

Soon after moving to Atherton, Don reconnected with his business school friend and Kappa Alpha fraternity brother, Ray Hemming. Ray was a CPA who was operating as a sole practitioner in San Mateo after spending time with Price Waterhouse. He convinced Don to try a new career as a tax accountant because he thought Don might enjoy it. Ray was right. Don’s new career lasted 28 years. He loved his work and the accounting business thrived, becoming Hemming Morse & Co., and employing over 100 people in three Bay Area locations. Don was in charge of the tax department.

Don was active at Holy Trinity Church and later St. Bede’s Church, where he was Treasurer. He also became involved in fundraising activities at Stanford Business School and helped establish a Planned Giving Advisory Council there.

Don and Beth’s boys grew up in a post-World War II ranch house on Alejandra Avenue. Having grown up in a rural environment, Don loved having two acres to manage. As he wrote a while ago, “It was a great place to raise four sons. There were always plenty of chores to be done and lawn to be mowed, plenty of room for playing ball and trees for building tree houses.”

Don and Beth lived in Atherton for 25 years.

In 1986, with their sons grown and out of the house, Beth and Don moved to Sharon Heights in Menlo Park, where they enjoyed creating a new garden on a smaller scale and having neighbors closer by. They also began to travel more extensively, often a relaxing trip to a favorite spot such as Hawaii or Carmel, or an adventure through a Stanford trip to another part of the world.

In 2003, Beth and Don moved to the Sequoias in Portola Valley where they enjoyed socializing with longstanding friends and making new friends.

There will be a memorial service for Don on Sunday, June 26 at 1:00 pm at Christ Church, 815 Portola Road, Portola Valley (https://www.ccpvw.org/contact.html). The family asks that all guests be fully vaccinated.

In lieu of flowers, donations honoring Don Sweet may be made to the Leukemia & Lymphoma Society (https://www.lls.org/) or the Stanford Alzheimer’s Disease Research Center (https://med.stanford.edu/adrc.html).

The family would like to acknowledge the loving care provided to Don by the Sequoias Health Center staff and the private caregivers from Canopy Home Care, especially Ana, Raschell, Christine, and Maria.

Photo Gallery
0 photos Upload a photo
Remembrances
0 entries Submit a remembrance
Memorial service
There will be a memorial service for Don on Sunday, June 26 at 1:00 pm at Christ Church, 815 Portola Road, Portola Valley (https://www.ccpvw.org/contact.html). The family asks that all guests be fully vaccinated.
Make a donation
In lieu of flowers, donations honoring Don Sweet may be made to the Leukemia & Lymphoma Society (https://www.lls.org/) or the Stanford Alzheimer’s Disease Research Center (https://med.stanford.edu/adrc.html).
About this site     Contact us