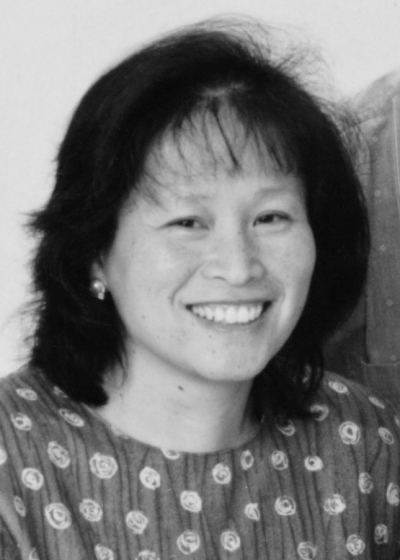 Mary shone as her family’s North Star even through five years of pain, limited mobility, and multiple surgeries following a 2015 car crash. She was the first person others would call for advice and guidance and was extraordinarily selfless, kind, warm, strong-willed, and loving. In what was to be her final surgery in hopes of a pain-free life, Mary peacefully passed away from complications in the presence of her family and Dvorak music.

Mary (Geem Haing “golden charm”) was born and raised in San Francisco, California. Her father Jimmy (Oh Ming) Hom passed away in 1962, leaving their hard-working mother to raise and support six children. Mary spoke Toisan Chinese and English (mostly learned from television). Mary often translated for her mother and helped care for her younger siblings, run errands in Chinatown, and sew clothes — including her own.

Mary loved and excelled in school, expressing her artistic, scientific, and caring nature through creative writing, the science club Lux Lab, and the Red Cross. Mary double majored in Biology and Mandarin Chinese at Stanford University, where she met her husband of 35 years, Tom Cooper. She attended Albert Einstein College of Medicine in New York and did her residency in OB/GYN at Mt. Zion Hospital in San Francisco.

Mary especially loved traveling, first studying at Stanford’s Vienna campus and then exploring Europe by herself and with friends. Later, she traveled across the globe including visiting her parents’ childhood villages in China. Her gift for languages enabled her to become conversant in Spanish, German, and Swedish. She did not want to miss anything in each place, which sometimes meant a missed train or plane.

Not long after having fraternal twins (discovered by a self-performed ultrasound) and a third child two years later, Mary retired from medicine to become actively involved in her children’s lives. She took on countless volunteer roles, ranging from sugar egg event co-leader to soccer commissioner, earning several PTA awards. While teaching Art In Action, Mary developed a love of oil painting, taking classes and workshops locally and in Carmel, Los Angeles, Russia, and Italy. She loved to create something of beauty and enjoyed the new friends and adventures painting offered. She grew to think of herself more as an artist than a physician, though she continued to keep diligent notes and a keen memory on just about everything — except the location of her cell phone and glasses.

Mary loved flowers, especially roses and irises, and memorized an impressive number of plant names. She kept a beautiful rose garden and enjoyed fresh flowers at home. Mary was an avid reader, Scrabble player, and murder mystery novel fan. She loved a mug of Tetley tea with a NY Times crossword puzzle in the morning and a glass of red wine with a crime show at night.

Family life was central to Mary. She demonstrated love for others with unconditional support, including camping at bluegrass festivals while driving cross country, pampering the children with fancy pancakes and Dutch Babies, attending every child’s music and sporting event, and carefully researching the best windows to install in a fixer-upper.

Mary was a fierce advocate for her family and anyone in need. She always went out of her way to help others, from frequenting a struggling local market, to bathing her neighbor’s skunk-sprayed Siamese cat in tomato juice. In every aspect of life, Mary chose her own path, unequivocally staying true to herself and living on her own terms. Her adventurous spirit and playful, caring nature will be deeply missed by all who knew her.

Photo Gallery
0 photos Upload a photo
Remembrances
0 entries Submit a remembrance
Memorial service
https://www.weremember.com/mary-hom/2x1m/memories A memorial service will be planned post-Covid.
Make a donation
In lieu of flowers, the family requests donations to Doctors Without Borders, the Pacific Art League, or a charity of your choice.
About this site     Contact us