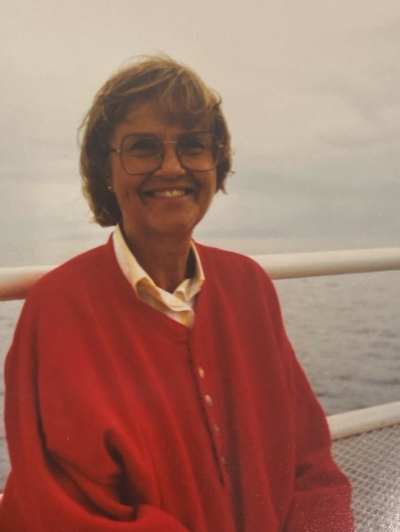 Elizabeth Zimmerman died peacefully early Monday morning, August 30th, 2021. Her parents were George Martin Congdon of Montana and Jane Mary Talle of Liverpool, England. She and her brother, Richard, lived for a time in Minnesota and Iowa. After her father died, her mother moved the family to Redding CA., where her mother taught school. Elizabeth “Liz” attended Shasta High School, where she was very involved with the school newspaper. She also volunteered at the local hospital as a candy striper. She then attended Pomona College in Claremont, CA. where she graduated with a Bachelor’s Degree in Dramatic Arts. While attending Pomona College she met Don Zimmerman, whom she would later marry.

She married Bob Tuthill in 1953 and they lived in San Francisco, San Jose, Pasadena, and Menlo Park, CA. While in San Francisco, she worked as a teacher and later tutored remedial reading from home in Menlo Park. She and Bob had 3 children, Mark, Cynthia and Kathryn. Mark Tuthill married to Nickie, lives in San Francisco, CA. Cynthia Tuthill married to Jim Orr, lives in St. Helena, CA. They have two children from her first husband, Brian Carilli; Jessica and Mark Carilla. Jessica and her husband Adam Young have two children, Ryder and Adelaide. Mark and his wife Stephanie, have one son, Brian. Kathryn Thome married to Daryl lives in Hollister, CA. and have one son, Nick.

Elizabeth “Libby” then married Dr. Don Zimmerman in 1980, they lived in Palo Alto and Menlo Park, CA. During this time she worked for Don’s Oral Surgery office and also as a realtor. She and Don enjoyed playing bridge with their friends.

When Libby and Don retired they moved to Nipomo, CA. and began to travel worldwide and socialized. Libby even wrote short stories and had them published.

When Don passed away in 2005, Libby decided to move back to Palo Alto. She lived at Channing House for many years and was involved with her writing group. She was always thankful for the dear friendships that she formed there, and was very grateful that she was treated with love and compassion by the many wonderful caregivers at Channing House.

Her beautiful smile and wonderful sense of humor will be missed by all who knew and loved her.