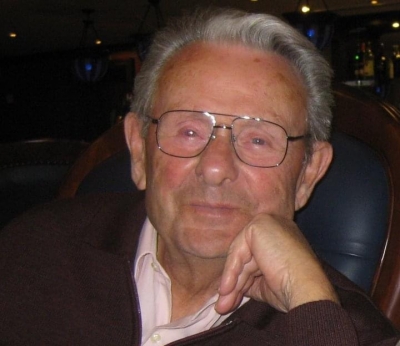 Emanuel (Manny) Galdes, 95 years young, died peacefully of natural causes on June 2, 2020 while surrounded by his loving family. Emanuel was born on April 10, 1925 in Naxxar, Malta to Anthony and Carmela (Bonavia) Galdes. Emanuel was a shy but active child who loved the sea. He spent as much time as he could swimming and fishing when he wasn’t helping his father out at the family bakery. After World War II, Emanuel ventured out to London for a couple of years before immigrating to East Palo Alto, California in November 1957, where his older brother, Charles, had already settled. Upon arriving in California, he met the love of his life, a Maltese beauty named Margie Spiteri. Emanuel and Margie were married in San Francisco on July 8, 1961.

Once married, they moved to a small apartment in Palo Alto at the corner of Lytton Avenue and Waverly Street (still standing to this day). After three years of apartment life, Emanuel was anxious to take on the pride of ownership. They would purchase what would become their lifelong home on Channing Avenue in Palo Alto in July 1964. Emanuel didn’t waste any time on making the home their own. He was literally tearing out the closets on the day they moved in. Emanuel and Margie always worked side by side with whatever project they tackled. They raised two children, Diane (born in December, 1962) and Jeff (born in November, 1965), and worked hard, saved and sacrificed to provide them with the best possible examples, guidance and a strong foundation.

Emanuel was a “jack of all trades” and a master of many. In 1958, he built a breathtaking all-wood Glen-L Audeen ski boat. The boat would become the centerpiece of many wonderful trips where Emanuel would teach so many to waterski, always patiently waiting in the sun and providing guidance and encouragement. His beautiful boat was passed down to his son, Jeff, who has lovingly restored it over the years and has always kept it in pristine condition. It has been a source of family fun for generations and his legacy will live on through it for many future generations to come. Emanuel had many talents besides boat building. Although he only had limited formal education, he could cook, bake, garden, sew, fix absolutely anything with a motor and remodel an entire house from the ground up. He was also an absolutely fabulous dancer. Emanuel was always quick to build and configure a solution to any problem. In fact, he held two patents - one for a flexible boat hitch and another for a collapsible barbecue.

Emanuel was a proud member of Sheet Metal Workers’ Local No. 104 and spent 30 years in the sheet metal profession. Whether he was building a clean room at Fairchild Semiconductor or Hewlett Packard in the early days of the computer industry or a kitchen ventilation system for one of the local restaurants, Emanuel was always recognized as the best at what he did.

In 1982, Emanuel retired and he and Margie embarked on the next phase of their life. They loved to travel and they criss-crossed the US in their motorhome, went on several cruises, and traveled to many parts of the world. Emanuel loved fishing and they would spend several weeks each summer in Canada catching salmon. He would often travel back to his beloved Malta to spend time with his sisters, family and friends. In June of 2019, at the age of 94, he travelled one last time to Malta with Margie, his daughter, Diane, and granddaughter, Olivia. The memories of this trip will be treasured forever.

Over almost 60 years of living in Palo Alto, Emanuel and Margie made many lasting friendships through the community of the St. Albert the Great church and Companions on the Journey. Those who knew Emanuel, loved his kind smile, gentle nature and curious mind. He is survived by his wife of 59 years, Margie (Spiteri) Galdes; children Diane Baum (Andrew) and Jeff Galdes (Laurie); five grandchildren Megan Galdes, Sarah Galdes, Andrew Galdes, Benjamin Galdes, Olivia Baum; sister Josephine (Galdes) Fenech; sister-in-law Mary (Spiteri) Galdes, brother-in-law Spiro Spiteri and nieces, nephews, great nieces and great nephews both in the US and in Malta. Preceded in death by his parents, brother Charles Galdes and sisters Salvina Galdes, Rose Galdes, and Tereza Galdes. A virtual memorial service was held on Friday, June 6, 2020.

To honor Emanuel’s memory, donations may be made to the Companions on the Journey at www.companionsonthejourney.org/give/, St. Jude’s Children Research Hospital https://www.stjude.org/donate/donate-to-st-jude.html, or Mission Hospice www.missionhospice.org/donate/.

Photo Gallery
0 photos Upload a photo
Remembrances
0 entries Submit a remembrance
Make a donation
To honor Emanuel’s memory, donations may be made to the Companions on the Journey at www.companionsonthejourney.org/give/, St. Jude’s Children Research Hospital https://www.stjude.org/donate/donate-to-st-jude.html, or Mission Hospice www.missionhospice.org/donate/.
About this site     Contact us