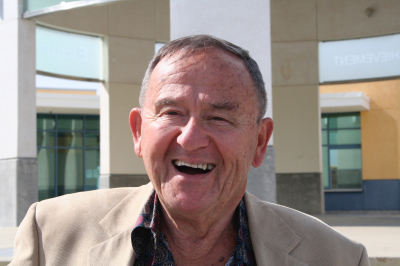 Dr. Eric Strauss of Palo Alto, CA passed away suddenly on September 8th at the age of 90. Born in Berlin, Germany in 1931 to William and Anna Strauss, Eric and his parents left their home and immigrated to the US in 1939 to escape Nazi persecution. His four grandparents, who remained in Germany, tragically lost their lives during the Holocaust.

Upon his family’s arrival at Ellis Island aboard the SS Volendam, Eric, who spoke virtually no English at that time, worked to acclimate by quickly embracing the educational opportunities that America offered. He earned admission to storied Stuyvesant High School, received his undergraduate degree in Psychology from Yale University, and graduated with his medical degree from the Columbia University College of Physicians and Surgeons.

During his residency at Bellevue Hospital, Eric met nurse Nancy Klatt, and their courtship led to marriage in New York City in 1960. After finishing his medical training as a urologist, Eric served his new country in the US Army as a doctor at San Francisco’s Letterman General Hospital. When his military service was completed, Eric and Nancy decided that their permanent home would remain in California, where Eric could enjoy, year round, the sun he cherished so much.

He worked for two years with Stanford University at the Veterans Administration Hospital in Palo Alto. Then, in 1966, Eric chose to focus on clinical medicine, joining the Palo Alto Medical Clinic where he practiced for the next 37 years. He ultimately returned to the VA system, working in both Livermore and Palo Alto, to close out his illustrious career. All told, Eric practiced urology for 51 years until his retirement at age 81. An “old school” physician, Eric was dedicated, thorough and generous with his time; he took great pride in his work and cared deeply about the well-being of his patients.

In addition to his lifelong love of medicine, Eric never passed up a game of bridge or a chance to pursue gold master points, was a San Francisco Symphony season ticket holder for nearly 60 years, and was a dedicated cover-to-cover reader of the New York Times.

Eric and Nancy were married for 61 years until her passing in May of 2021. He is survived by his three sons and their spouses; Ralph and Debbie, Jonathan and Lori, and Roger and Karen, his daughter Ellen Knepp, his brother Franklin Strauss and sisters-in-law Merle Strauss and Carolyn Parker, his twelve grandchildren, and his two great-grandchildren.

Eric believed that an active, engaged mind keeps you young, and he remained our respected patriarch until his last day. Eric will always be remembered for the tremendous influence and lasting impact he had on his family, his patients, and his friends. He will be missed more than words can say.

Burial will be at Oak Hill Memorial Park in San Jose, CA in a private family ceremony.

So long for now G-Pa; thanks for teaching us that wearing red keeps you young, it’s not about the food, and love is always the default.

Photo Gallery
0 photos Upload a photo
Remembrances
0 entries Submit a remembrance
Memorial service
Eric will be buried at Oak Hill Memorial Park in San Jose, CA in a private family ceremony.
Make a donation
Donations, in lieu of flowers, can be made in Eric’s name to the Brentwood Union School District Education Foundation, PO Box 853, Brentwood, CA 94513.
About this site     Contact us