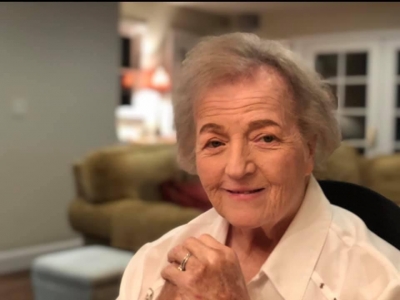 Gail Dolores Blach passed peacefully into the gates of Heaven. She was 84. A lifelong resident of Menlo Park, she is survived by her loving and faithful husband of 61 years, Richard Blach, her sons, Daniel and Matthew, both of Napa, and her granddaughter, Emily.

Her sister, Sr. Joan Marie Derry, a retired Catholic nun in the Sisters of the Holy Family order, and her brother, Fr. Daniel Derry, a parish priest currently serving at Madonna del Sasso Church in Salinas, also survive her as do many nieces and nephews from both the Blach and Derry families.

Gail, a lifelong Menlo Park resident, was the fourth child of six. Her parents,  Edward and Helen Derry, her sister, Nancy Madigan Nejasmich Derry and her brothers, Edward Jr. and James Derry, predeceased her.

Gail had a love of holiday celebrations. She was born two days before Thanksgiving and wedded to Richard the day after Christmas in 1959 at St. Raymond’s Church on Santa Cruz Avenue in Menlo Park. Dick and Gail were the first couple to be married at St. Raymond’s after it was built. Following the passing of her mother, Gail and Dick took over the joyful Blach-Derry holiday celebrations hosting family, friends, priests and nuns for more than 30 years. Dick is the last surviving member in a family of eleven brothers and sisters.

Gail, a robust people person, truly loved a good story – a characteristic she shared with her husband. With a broad, rosy-cheeked smile and good-humored Irish insistence, she would urge friends and guests to launch into a more in-depth tale so she could capture all the details, often while enjoying her favorite cocktail, a Canadian Club whiskey with 7-up. Gail had an inquiring mind and she enjoyed good company as well as being “in the know.”

Gail met the love of her life by way of introduction from one of the early Menlo Park Fire Chiefs, Thomas F. Cuff. The firehouse was next door to Gail’s family’s longtime business, Derry’s Feed and Fuel on Oak Grove Avenue, owned by her father and, in addition, Chief Cuff’s daughter was married to Bob Blach, Gail’s soon-to-be husband’s brother. Gail and Dick, who had recently finished his service in the Air Force, were introduced at a wedding reception.

Throughout her life, Gail supported many organizations while raising her two sons including St. Francis Center Redwood City, the Medical Mission Sisters in Los Altos and the Corpus Christi Monastery in Menlo Park.

She enjoyed playing bridge with friends, swimming and tennis.

Her main focus was always on family, gatherings for any happy occasion and showering her two sons and granddaughter with love and affection.

In her late years, she became a Good Samaritan for many friends and family members who reached out to her in times of need. She would spread the word among friends and family as well as numerous Catholic organizations asking for prayers, comfort and the Lord’s help.