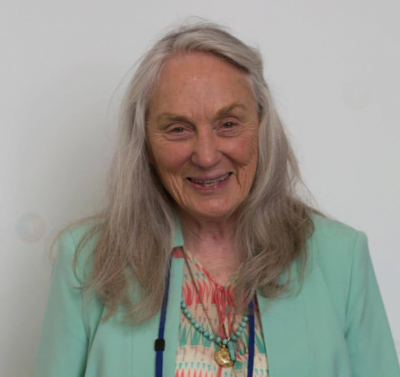 Genie Zylks Laborde-Griffin, age 94, of Palo Alto, California, died peacefully on January 14, 2023. Born on February 19, 1928, in Borger, Texas, and raised in El Dorado, Arkansas, she was the first child of Floyd Weber Zylks and Molsie Lowery. She is survived by 5 of her 7 children, Cliffe F. Laborde (Margaret), Gary L. Laborde (Betsy), John Peter Laborde, Jr. (Renee), Adrienne Laborde Macgowan (Charles), and Kathryn Griffin Wong (Erik). She was preceded in death by her oldest son, John Tracy Laborde (Susan) and by Mark Lee Laborde, who died one day after his birth in 1952. She is also survived by 16 grandchildren and 19 great-grandchildren. She was preceded in death by her brother, Wayne Zylks.

Genie spent her formative years growing up in El Dorado, Arkansas, and thereafter attended college at Louisiana State University, where she majored in Fine Arts and received her first of many educational degrees. While at LSU, she met John Peter Laborde and they ultimately married on July 2, 1949. After living in Marksville, Louisiana for a period of time, in 1950 they moved to New Orleans, where over the next 20 years Genie assisted in raising 5 children, the subject of which she wrote her first published book, Tranquilizers for his Cup, a story centered around the challenges of raising 5 children, maintaining a household, and being a model wife! She thereafter pursued various educational degrees, obtaining a Master’s Degree in Creative Writing from Tulane University, painting, and studying for two Doctorate degrees at Tulane, before eventually moving to California, drawn to the allure of free and creative expression and the human potential movement. She then pursued and obtained her Doctorate Degree in Psychology and Education at the University of California Santa Barbara.

While there, she met Dr. George Griffin, ultimately moved to Palo Alto, CA, and married George on February 21, 1981. Shortly thereafter, they adopted newborn Kathryn in Hong Kong. Genie and George shared a wonderful life and relationship until the time of George’s death in 2012.

Genie continued her educational pursuits, obtaining her degree in Confluent Education with a specialty in neuro-linguistic programming, and leading to her next published book, Influencing with Integrity, which sold over 151,000 copies.

In 1982, she founded International Dialogue Educational Associates, Inc., and over the next 40 years, she conducted business training seminars/webinars for corporations around the world, including the United Nations, IBM, Chase Bank, AT&T, HP, Intel, Dell, Stanford University, and Sprint. The themes of these seminars centered on communication excellence. Genie authored over 20 books or publications during her long career as a communications consultant. During the course of her career, Genie was a member of the American Psychological Association, the Association for Humanistic Psychology, and the American Society for Training and Development.

The Mercury News recently featured her as the “Grandmother of Silicon Valley” in regard to her Palo Alto garage where a number of tech giants including Nest got their start.

Genie was always way ahead of her times. She was a force of nature, with all the fierceness, beauty and contradictions which nature conjures. She was a successful author, painter, teacher, trainer, philosopher and mother. She was magical, mystical, and she is undoubtedly now flying through the heavens riding on the back of a unicorn.

Photo Gallery
0 photos Upload a photo
Remembrances
0 entries Submit a remembrance
Memorial service
Arrangements are being handled by Spangler Mortuary and a memorial service to celebrate Genie’s life will be held in the garden of her home in Palo Alto at a later date.
About this site     Contact us