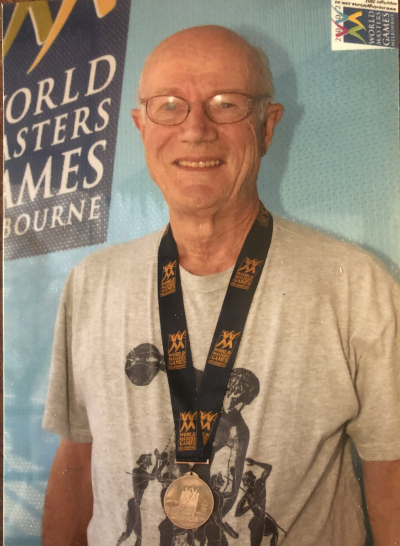 George Albert Whiting, 89, died peacefully at home in San Mateo, California on September 14, 2021. He was born in Torrance, California to Sanford Albert Whiting and Mary Elizabeth Whiting on November 21, 1931.

Described by many as “the nicest man in the world”, George was student body president of Torrance High School and a star on the track and football teams where he earned the nickname “Wheaties” since his teammates thought his image would end up on the cereal box one day.

In 1949, he was awarded the most outstanding ROTC Air Force Cadet at the University of California Berkeley where he majored in Economics, played sports, and was President of Phi Kappa Psi fraternity. He spent his summer months during college working for the YMCA, serving as a lifeguard, shoveling oil shale rock for Standard Oil, and as a sportswriter for the Torrance Herald.

Upon graduation from Cal-Berkeley, George was commissioned in the United States Air Force as a second lieutenant, later becoming a Colonel in the Air Force Reserves teaching at Moffett Field.

After concluding his active duty in the USAF, George went on to become a senior HR executive at Pacific Bell in California as well as AT&T in New York.

George participated in his company’s track and field team as a shot put and discus thrower, leading his company to first place among twenty other teams in the Corporate Games of 1999. George achieved All-American status as a result, which enabled him to compete in the 2002 World Masters Games in Melbourne, Australia, where he brought home a gold medal in the 70–74-year-old age group for the discus event.

In 1955, George married Madge Venable McEldowney in Christ Episcopal Church in San Antonio TX after meeting while he was stationed there to complete his Air Force training at Lackland Air Force Base. They later moved to New York, Southern California, Palo Alto, New Jersey, and Los Altos Hills.

In 1987, he married Phyllis Berk whom he met at a Stanford University dance. She survives him as do his children, son Mark (his wife Brigitta), daughter Bonney (her husband Mark), daughter Hilary (her partner Keith) and grandchildren Natalie, John, Adam, and Martin. He is also survived by his sister Dorothy (her husband Jack) and by his wife’s daughter Claudia (her husband Trevor). His sister Eileen and brother Frank predeceased him.

George loved to travel, and he and Phyllis kept a world map marking their adventures around the globe. George also enjoyed watching his children and grandchildren participate in sports, music, and the arts. George loved ice cream, donuts, and waffles. He enjoyed red wine and a vintage of 2016 Oakville Cabernet was produced in his honor. In lieu of flowers, please donate in his memory to Stanford Children’s Hospital, where George was a volunteer for many years.

George’s ashes per his wishes will be scattered at sea off Makena, Maui. His memorial will be at Saint Matthews Episcopal Church, San Mateo on November 21, 2021.