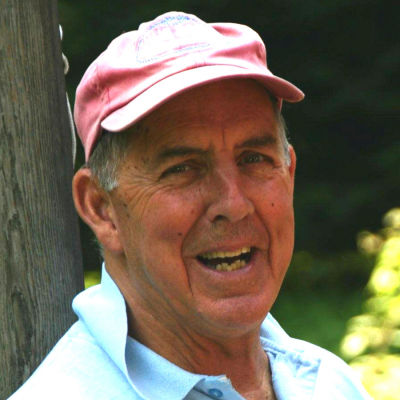 George prepped at Lawrenceville then attended Princeton, graduating in 1957 with a degree in psychology. George developed many deep friendships at Princeton and as a member of Cottage Club. The relationships with both the people and institutions were life long and of the greatest importance to him. Later in life, George worked diligently as a Trustee and Treasurer of the Classmate Fund, which was created to seek out and support P’57 classmates and their immediate families who were in need.

He spent the 4 years after graduation in the US Army, graduating from the Officer Candidate, Airborne, and Ranger schools. He was assigned to Fort Ord in California where he commanded an Airmobile Rifle Company and first got involved in sport parachuting.

After leaving the US Army, George spent the first 10 years of his business career in New York with Stone & Webster and later Drexel in institutional security sales. In 1970, he moved to California to join his father in the start-up of a nuclear fuel brokering, trading, and consulting company, NUEXCO. That company grew into the nuclear industry’s preeminent source of information concerning the supply, demand, and price of uranium. It was challenging work, including worldwide travel to wherever uranium was mined and used. George spent the last 5 years of his career as an independent consultant.

His partner through all these years was Jo. Though George and Jo Volkening were married in 1960, their relationship began in 1951, before either one could even drive a car. She was and forever will be his one and only true love. In addition to his wife Jo, George is survived by his sister Mary Carolyn Chandor, his daughter Lindsay (P’87), his son Walker, and seven grandchildren, three of whom attend or attended George’s beloved educational institutions.

Jo and George were and are passionate about giving, believing that to whom much is given, much is expected. They gave generously to a number of causes and foundations in Carmel and elsewhere about which they were passionate, both individually and collectively. George was particularly enthusiastic in his support for Lawrenceville, Princeton, the Carmel Public Library, and - most recently - the Carmel Valley Manor Foundation.

George spent much of his leisure time as an active skydiver. It was truly his thing. In 1986, he requalified and had - upon his retirement in 2013 - amassed almost 2,000 jumps and 34 hours of cumulative free fall time. He was most proud of his participation in a number of world records set by two senior groups - SOS (Skydivers Over Sixty) and JOS (Jumpers Over Seventy).

George will be missed deeply by all who knew and loved him. To the husband, father, grandfather, and friend, we wish him Blue Skies.

In lieu of flowers, a donation to either the Carmel Public Library Foundation or Carmel Valley Manor Foundation would be appreciated.

Make a donation
https://carmelpubliclibraryfoundation.org/giving-support/
About this site     Contact us