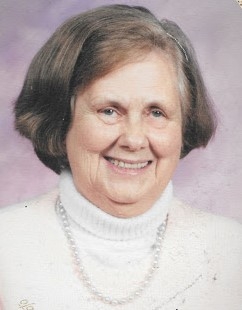 Glena Lois Bruce Ballentine, a longtime community volunteer and service provider who lived on the Peninsula for more than 60 years, died of natural causes July 14 in Albuquerque, N.M. She was 95, passing away 25 years to the day of her husband Fred's death.

Mrs. Ballentine, a native of Paonia, Colo., moved in 1945 to Hollywood, worked at California Bank and did some fashion modeling in her early years. She once said she was one of few young women moving to Hollywood in the 1940s who did not want to become a movie actress.

The Ballentines married in 1948 and moved to the Peninsula in 1953. Fred Ballentine became a star real estate salesman for the David Bohannon organization in San Mateo and later started his own firms on the Peninsula in the 1950s and '60s--Ballentine Associates and August Associates, which had offices in San Mateo, Menlo Park, Palo Alto, and Los Altos. Mrs. Ballentine had her own real estate sales license and assisted him in running the businesses. They were married for 48 years until Mr. Ballentine's death just short of his 76th birthday in 1996.

The Ballentines lived in Woodside, Menlo Park, Redwood City, and San Mateo during their long tenure in the Bay Area. Mrs. Ballentine was active in numerous civic and faith-related organizations, including the Woodside School PTA, the Christian Women's Organization, Children's Home Society, the Girl Scouts, and Valley Presbyterian Church, where she served as an elder and deacon. She and other members of her family also were active in local community theater, including the Woodside Community Theater and the Portola Valley Theatre Conservatory. She and Mr. Ballentine performed in such productions as "Call Me Madam," "Girl Crazy," "Bells Are Ringing" and others in Woodside.

Photo Gallery
0 photos Upload a photo
Remembrances
0 entries Submit a remembrance
Memorial service
A memorial service has been scheduled for Saturday, July 24, at 10 a.m. at the Paonia United Methodist Church, 307 Onarga St., Paonia, Colo.
Make a donation
In lieu of flowers, memorials are requested to be donations to Valley Presbyterian Church, 945 Portola Road, Portola Valley, Calif. 94028, or Paonia United Methodist Church.
About this site     Contact us