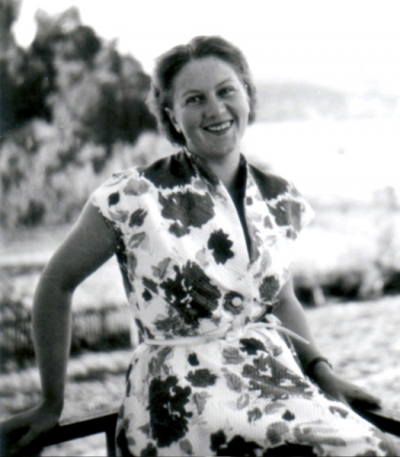 On Tuesday June 16th, Ilse Hanna Mede, dear mother, grandmother, and great-grandmother, passed away unexpectedly at her home at the age of 96.

Ilse was born in the beautiful village of Polle, Lowersaxony Germany, in May of 1924. She first immigrated with her husband Alfred to Montreal Canada in 1953, where they began to raise a family, build a house in the countryside and where they lived for 10 years. Since 1963 Ilse lived in Woodside California, which was her home until her death. She was the youngest of four children, and was preceded in death by her sisters Mathilde and Minchen, brother Wilhelm, and parents Wilhelm and Wilhelmina (Minna) Winter, and her husband Alfred.

Ilse traveled widely across Canada, the United States, Europe and Japan. She was a talented designer/seamstress who enjoyed the creative process, sewing and knitting. A wonderful cook and gardener, Ilse created a warm and rich home for her family. She loved animals, with a life filled with dear pets and a love of all the wild creatures. As a young woman, Ilse and Alfred, as part of a theater group in her home village, took part in performances of plays by Shakespeare and Goethe among others. Ilse was the keeper of the old ways and traditions of her upbringing, while always applying herself to learning new things and expanding her experiences. Always elegant and curious, she was engaged in life until her very last days.

She raised her children, Cordula, Matthias, Andreas, Norbert, and her nephew Maurice, and touched the lives of many people throughout her long life.

A memorial service was held in San Mateo County, California, on June 27. A remembrance plaque will be placed next to her husband Alfred, who passed away in 1996, at Skylawn Cemetery in San Mateo. May she rest in peace and love.

In loving memory, Ilse will forever be missed and cherished by all who held her dear.