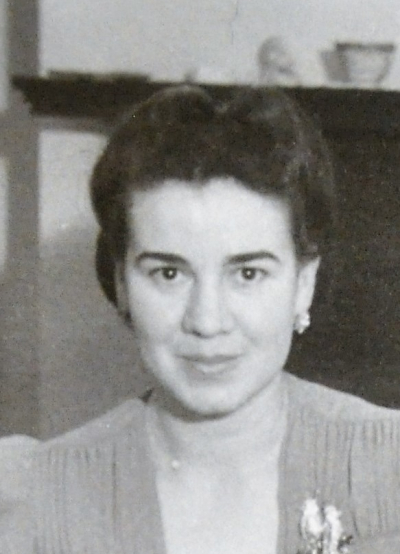 Iraida Busó Espinosa, a longtime resident of Stanford, passed away peacefully in her Los Altos home on January 5, 2023, a month shy of her 105th birthday. A musician, mother, teacher, and community volunteer, Iraida had boundless energy, loved spending time with family and friends, and believed in taking full advantage of the opportunities that life presented.

Iraida was born in Humacao, Puerto Rico, on February 22, 1918, the youngest of five children born to Monserrate Carrasquillo Martinez and Francisco Busó Cabrero. At nineteen, she graduated from the University of Puerto Rico with majors in French and Spanish. As she later described herself, she was “an overachiever with limited social experience, no lipstick, no dating, no heels, and still in pig-tails.”

Iraida’s musical talents led her to study piano with Jesus Maria Sanromá, the pianist of the Boston Symphony Orchestra who would spend summers in Puerto Rico teaching promising students. Sanromá encouraged Iraida to continue her education in Boston, as her older sisters had done, and Iraida leapt at the opportunity. In Boston she thrived, taking classes at the Boston Conservatory, studying with Nadia Boulanger, singing in Symphony Hall, and completing a Master’s Degree in Music at Radcliffe. Iraida also met Aurelio M. Espinosa Jr., an instructor at Harvard, who would become her partner for life. Shortly after meeting Aurelio, Iraida mentioned plans to return to Puerto Rico. Upon learning of her plans, Aurelio proposed marriage. They were married in June 1942 and shared the next 62 years together, until Aurelio’s passing in 2004.

In the summer of 1942, Aurelio was commissioned to teach languages at the US Military Academy and the couple moved to West Point, NY. At West Point Iraida contributed to the war effort in every way possible, including folding bandages for the wounded, and welcomed their first child, Margarita. Following the end of the war, Iraida and Aurelio moved to California, where Aurelio accepted a position at Stanford University. In California, their family grew with the birth of Maria and Ramon.

In the 1960s, Iraida began her focus on education. From 1960 to 1963, she taught Spanish at Woodside Elementary School. In 1963, she moved to the Palo Alto Unified School District and coordinated foreign language instruction at the primary school level. In the late 1960s, she became a classroom teacher at Walter Hays Elementary School. She loved finding creative ways to motivate her students and welcomed them to backyard barbeques at the family home on the Stanford Campus. And she retained a love of foreign languages, often leading groups of teachers on summer trips to Mexico and Europe.

Iraida retired from teaching in 1983 and focused her energies on community service. An active member of Neighbors Abroad, Palo Alto’s Sister City Organization, she served as the organization’s President in 1983–84 and remained active throughout the 1980s and 1990s. She developed a special interest in Palo, Leyte, Palo Alto’s sister city in the Philippines, and worked to raise funding for a children’s library and vocational training center there. The Catholic church also played a major role in her life. She was a member of St. Thomas Aquinas Parish and helped organize Christmas Bazaars and other fundraisers for St. Elizabeth Seton School. She was also an active member of the Peninsula Radcliffe Club and AAUW.

In 2003, Iraida moved from the Espinosa family home on the Stanford Campus to Los Altos, CA. Living in Los Altos enabled her to form new friendships, re-kindle old ones, and tackle new opportunities such as line dancing.

Iraida is survived by her three children: daughters Margarita Smith (Walter Smith) of Boise, Idaho, and Maria Shipley (Wayne Shipley) of Redwood City, CA, and son Ramon Espinosa (Rita Seymour) of Palo Alto, CA. She is also survived by seven grandchildren and twelve great-grandchildren. A Memorial Mass in her memory will be celebrated at St. Thomas Aquinas Church in Palo Alto, on Saturday, January 21, at 10 am. In lieu of flowers, donations in her name may be made to Neighbors Abroad, 355 Alma St, Palo Alto CA 94303.

Photo Gallery
0 photos Upload a photo
Remembrances
0 entries Submit a remembrance
Memorial service
A Memorial Mass in her memory will held Saturday, January 21, at 10 a.m. at St. Thomas Aquinas Church, 751 Waverley Street, Palo Alto.
Make a donation
In lieu of flowers, donations in her name may be made to Neighbors Abroad, 355 Alma Street, Palo Alto 94303.
About this site     Contact us