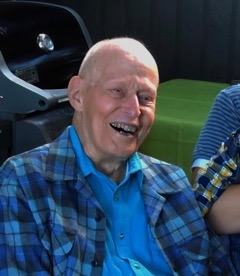 James Blackaby, a longtime Palo Alto resident, passed away in Portland, Oregon, on December 31 at the age of 98. Jim was born on November 10, 1921, to Earl and Bertha Kincaid Blackaby and grew up in Ontario, Oregon. In 1939 he attended University of Oregon. He became an ATO and a devoted Ducks fan before transferring to University of Washington to pursue his interest in aerodynamics. At UW he met Mif Bendix, and the two were married on January 30, 1943. After serving in the Army during World War II, Jim returned to Seattle to finish his degree. In 1947, he accepted a job with NACA at Ames Research Center and moved his young family to Palo Alto. Jim began his career conducting research in the wind tunnels at Moffett Field. When Ames became part of NASA in 1958, Jim joined the Life Science Division. He was involved in the very earliest space flight research and technology for Project Mercury, Project Gemini, and the Apollo program, developing spacesuits and designing astronauts’ life support systems. He holds a patent for “the Blackaby Backpack,” a portable unit that enables astronauts to venture outside an orbiting spacecraft. In 1976 Jim retired from NASA to pursue traveling, gardening, and antique car restoration. He and Mif moved to Los Altos Hills and designed a noteworthy herb garden, grew test roses, and maintained an apricot orchard. They were active in the Rolls Royce Owners’ Club and the Bentley Drivers’ Club and enjoyed touring with the Northern California group. In 1986, Jim and Mif returned to their Pacific Northwest roots, relocating to Tigard, Oregon. Jim stayed at the home they built on Bull Mountain until in 2001, when he moved to Terwilliger Plaza in Portland. As a Willamette Valley Vineyards founder, Jim helped out at the winery for many years, and he was a faithful volunteer at the Oregon Historical Society until the time of his death. Jim was predeceased by his wife, Mif; his son, Jim; and infant son, Tom. He is survived by his daughter, Susan Blackaby, of Mosier, Oregon; granddaughter, Rudy Shaffer, of Port-au-Prince, Haiti; son-in-law, Jeff Shaffer, of Beaverton, Oregon; and grandson, James Blackaby, of Pleasanton, California. He proudly held the title of pater familias to nieces and nephews on both sides of the family and was delighted to preside over four generations of Blackabys. He will be remembered by all for his quiet, thoughtful, loyal, funny, and generous spirit.

Photo Gallery
0 photos Upload a photo
Remembrances
0 entries Submit a remembrance
Memorial service
A memorial service was held at St. Bartholomew's Episcopal Church in Beaverton, Oregon.
Make a donation
Donations in Jim’s memory may be made to the Treasure Valley Community College Foundation, 650 College Blvd., Ontario, OR 97914, or a charity of your choice.
About this site     Contact us