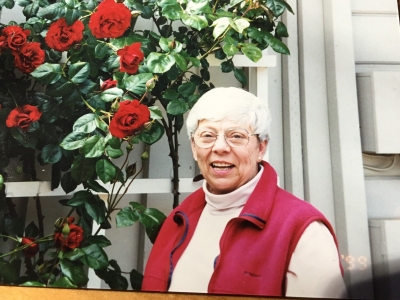 Jane Biebel Holland, 84, passed away on December 12, 2020 at her home in Palo Alto, with her sons at her side, after a brief illness.

Jane was born June 24, 1936 in Oakwood Ohio, a suburb of Dayton. Her parents were Lawrence Burton ‘LB’ Biebel, a prominent patent attorney, and Josephine Elizabeth ‘Betty’ [Hopkins] Biebel, a descendent of the earliest American settlers of Plymouth Colony, Stephen and Elizabeth Hopkins, whose child, Oceanus, was born on the original Mayflower journey.

Jane was a lover of horses as a child and was a talented show jumper. Her horse ‘Belle’ was a majestic creature she loved. She graduated Oakwood High School in 1954 and went on to attend Northwestern University, where she was a member of the Kappa Kappa Gamma sorority. She graduated with a B.S. obtaining a teaching degree. While at Northwestern she attended Stanford summer school, in 1956. She was very taken with life in California and was determined to return after college.

She married David B. Holland, a Stanford graduate, stock broker, investment advisor, political and civic activist and philanthropist in 1958. They briefly lived in San Francisco and Jane taught High school English. They moved to Menlo Park and then Palo Alto in 1960. Their first son Peter was born in 1960, followed by Craig in 1964.

Jane was a homemaker and a member of the Junior league and later supported, along with David, the political rise of Congressman Pete McCloskey. She and David supported the local residentialist cause in Palo Alto, hoping to maintain the town’s human scale and humane character. Jane never lost her love of horses and in the 1970’s competed in trail and endurance equestrian races.

She was a nature lover and animal lover, and had many loved pets, Dinky Dog as a child, Otis the cat, Sherry a lab, Royal Robert, a lab-her son Craig’s soul mate, Raj, and Blue, and Thomas all Siamese Cats. In the mid 1970’s she became a travel agent, and had the opportunity to travel widely around the world, which she took full advantage of and fully enjoyed.

In the early 90’s she retired and began a long process of redesigning and remodeling her home and garden, which gave her a great amount of joy and satisfaction. Her garden became her passion and she hosted many garden parties displaying her vast rose collection with friends and neighbors, whom she cherished, and who cherished her. It was her friend Michael who brought her into the rose world and who remained a friend for the rest of her life. She also volunteered for many years at the Gamble Garden acting as a docent for visitors.

In later years Jane became an active reader and was a member of various book clubs. She enjoyed her garden and home fully and it gave her great peace and comfort. Though not overly political she enjoyed the political commentary of Rachel Maddow nightly and was very happy, indeed relieved, to see the election of President Joe Biden.

Jane had a light spirit and her unique laughter was known to all who were her friends. She will be very deeply missed. Who knows where the time goes …

Jane is survived by her sister Nancy Easman, of Little Compton, Rhode Island, and sons Peter Holland and Craig Holland of Palo Alto.

Jane supported the work of the Gamble Garden of Palo Alto, Avenidas Senior Center of Palo Alto, and the Friends of the Palo Alto Library. No services are planned at this time. A final garden party memorial may be held at a future date.

Photo Gallery
0 photos Upload a photo
Remembrances
0 entries Submit a remembrance
Memorial service
No services are planned at this time. A final garden party memorial may be held at a future date.
About this site     Contact us