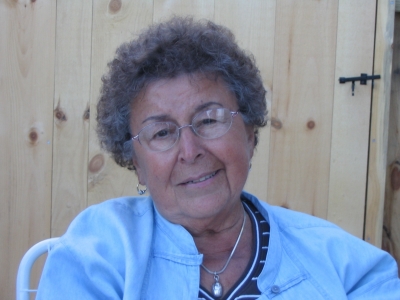 Jane B. Coladarci, 96, passed away quickly and peacefully (she would have insisted on nothing less) on May 7, 2016 in the company of her daughter and son.

Jane was born in Allentown, PA, on June 8, 1920, to Francis Marion Bottenfield and Jane Richards Teese. She worked for IBM after graduating from Grove City College in 1942 with a degree in business education, and, in 1947, married Arthur P. Coladarci after a brief and impassioned courtship.

Jane and Art moved to California in 1951 when Art joined the Stanford University faculty, and Jane soon was devoted to raising daughter Katy (b. 1951) and son Ted (b. 1953).

As wife and mother, Jane was both fiercely independent and utterly devoted to family. A pretty good disciplinarian, she also possessed a deep well of compassion and empathy that saved her children on multiple occasions as they negotiated the tricky currents of childhood and adolescence.

The Coladarci home in Woodside was always open to the children's friends, where soulful music, pasta feasts, and animated conversation were the norm. And in the inevitable times of need, many of these friends benefited from Jane's counsel, as when an eighth-grade friend of Ted's ran away from home and (naturally) came to the Coladarci house. Jane sat with him, off in the corner, as he talked through his difficulties, and she gently helped him reach the conclusion that there was no good in running away from the things troubling him.

With Katy and Ted off at college in the early 70s, Jane grew restless. One day in 1974, she turned up at the doorstep of The Country Almanac, a weekly newspaper in Woodside, and offered her services to sit at the front desk, answer the phone, and do anything else that needed to be done.

Her other talents were quickly realized, however, and, in the words of the editor-in-chief, Jane soon "became the powerhouse of the advertising department until she retired in 2004" at the age of 84.

In 2007, she moved to Yuba City, CA, to take up residence across the street from her best friend, Katy. To her last day, Jane lived independently.

Jane was predeceased by her husband of 44 years, Arthur Coladarci, in 1991. She is survived by daughter Katy (m. Ronald Ward), son Ted (m. Janet Spector), granddaughter Alison Spector Coladarci (m. Thomas Crane), grandson Gregory Spector Coladarci (m. Kaytee Miller), and great-granddaughters Abigail Crane and Lucilla Coladarci. She will be missed by them all, and by Hilda Ward (Jane's partner-in-crime) and Katy's many close friends, who quickly became Jane's close friends as well.

Photo Gallery
0 photos Upload a photo
Remembrances
2 entries Submit a remembrance
From Margaret Forsyth
May 29, 2016
Jane was my patient for many years while she lived in the Bay Area. I remember her as an intelligent, wise and engaging woman. I miss her.
About this site     Contact us