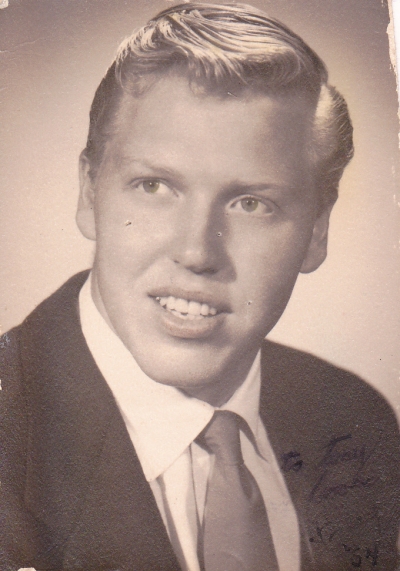 It is with profound sadness that we announce on Monday, December 21, 2020, Jerome K. Berg, businessman and long-time resident of Palo Alto peacefully passed away after long-term health issues and ultimately from the COVID-19 virus among the 65,000 in December.

Jerome was born on March 2nd, 1936 to LeRoy and Viola Berg and came to California from Minot, ND with his parents, uncles and older siblings. The family eventually settled in a home in Palo Alto on East Meadow which became the Berg family “home-base.”

Jerome was an alum of Palo Alto High School class of 1954. It was there he met his high school sweetheart, future wife and mother of his three children, Carol Ann (Wheeler) Berg. In school he enjoyed playing football. After graduating, he and Carol eloped in March, 1956 and were married in Carson City, Nevada. They were married nearly 50 years before Carol passed away in January 2005.

Jerome worked as a mechanic for another business in Palo Alto and eventually opened his own store, The Lawnmower Shop in San Carlos, CA. He subsequently opened a wholesale business for gardening equipment with his brother, Michael. Jerome loved getting to know his many professional gardener customers. He was a hands-on guy and built go karts, mini-bikes and a quarter-midget racer for his kids. He retired in 1988.

Jerome and Carol lived in Barron Park (Palo Alto) for 55 years. Jerome had a passion for creating beautiful landscaping and built two koi ponds and a tea house on their property on Paradise Way. Jerome loved a good laugh and was known to tell some real groaners. He loved entertaining and dancing with his wife. They were both involved in Palo Alto High School’s class reunions and he loved telling stories of growing up and catching the “Suntan Special” train to Santa Cruz, horseback riding at the Stanford stables, among other stories of “old” Palo Alto and his youth. Jerome also enjoyed watching movies and football on TV, swimming, golfing, vacationing and driving to the coast.

Jerome is preceded in death by his parents LeRoy and Viola Berg, brother Dean Berg, sister Margo Hoffman and wife Carol Berg. Jerome is survived by his siblings, Betty Murphy, Michael Berg, William Berg, Len Berg and his three children, Catherine Falkenhagen, Wendy Garbarino and Andrew Berg as well as many nieces, nephews and cousins across the country. He also leaves behind five grandchildren and three great-grandchildren.

Jerome will be interred at Alta Mesa Cemetery joining his wife Carol. Due to the virus, there will not be a formal service at this time.

Donations in his honor can be made at the American Stroke Association.

Photo Gallery
0 photos Upload a photo
Remembrances
2 entries Submit a remembrance
From Cathy
Jan. 7, 2021
Dad, you are always in my heart. With sadness I say Goodbye but with gladness, you are at rest and home in Heaven. With gratitude I thank you for being such a loving father, grandfather & great grandfather. I will never forget all you gave me. I wil...
Read more
Memorial service
Due to the virus, there will not be a formal service at this time.
Make a donation
Donations in his honor can be made at the American Stroke Association at www.stroke.org.
About this site     Contact us