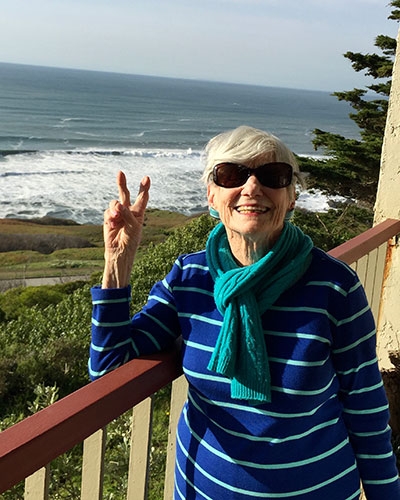 Joan packed a lifetime of experiences into nearly every year of her life. She traveled to every continent many times, including a trip to Jordan, Egypt and Syria as soon as flights were available after 9/11, a pre-detente trip to Russia and a brisk hike up the Masada in her later years. She lived a healthy, progressive lifestyle ahead of her time.

Joan was born in San Francisco on February 22, 1929 to Arthur and Louise Harzfeld. She attended Burlingame High School where she met her future husband, John. Her mother had graduated from the University of California, while her dad graduated from Stanford Law School. Joan received her BA in Journalism from Stanford in 1950 putting in place an intra-family Big Game friendly rivalry for years. Joan re-met John Inglis and they married in her parents’ backyard in 1955 after which they moved to Menlo Park and finally to the old house on Olive Street.

Joan worked at the Menlo Park Recorder, starting on the Social beat but working her way to more interesting fare which included a two-part interview with Hall of Famer Ty Cobb who lived in Atherton at the time, who was in the local news for loudly refusing to pay his power bill in a dispute with PG&E. Although this was the extent of her business career, she put her journalism skills to work creating newsletters for several groups including local schools, PTA, MP Presbyterian Church and the Orton Society.

Joan’s commitment to health and fitness was legendary. She was a health food maven before the 60s. She would do the grocery shopping on her bicycle (which she rode wearing a plaid skirt) and was known by all, as she waved to everyone. This unfortunately ended when she had a serious accident (while waving) which led to her increasing her outdoor daily walks to at least three miles until her late 80s when she moved this activity inside. Tai chi, aerobics and strength training and vitamin D sun baths were also part of her life.

Joan’s commitment to literacy was even more robust. She taught Great Books at the schools, taught illiterate adults to read, many of whom wrote letters to her crediting her with their success in life. She then joined her dear friends, Martha and Heidi Renner, in working to give dyslexic children a much-needed leg up through what is now the International Dyslexic Association. This was while working as an in-class assistant at Oak Knoll School for decades, assisting many a struggling child to catch up, keep up and finally to succeed.

At various times her restless mind led her to Swedenborgian, Episcopalian, Presbyterian, Baptist and Jewish houses of worship. She avidly studied religion and had faith. She was progressive and practical, pro gun-safety and put enough campaign signs in her front yard to “even the scales” with her adored friends from bible study. She was always ready to dance, particularly the Charleston, and John and she went to many jazz (and the occasional Zydeco) festivals through the years. Despite being tone deaf, Joan passed her rhythm and love of music to her three sons who all sang and performed musically. The sub-five footer also met Dr. Ruth at a Stanford reunion and famously told her, “You’re the first person I’ve ever met who’s shorter than I am!” Finally - Joan attended regular lunches with grammar school friends for years, into her 90s.

Her last five plus years were spent at the Avant in Palo Alto. Her good nature and compulsive hall-walking made her very popular and well-liked. She continued to exercise, read, play bridge and talk about politics (fiercely), books, shows and movies.

Joan was predeceased by her husband, John, and her oldest son, John Arthur, and is survived by her two sons, Christopher William Inglis and James Matthew Inglis and their families.