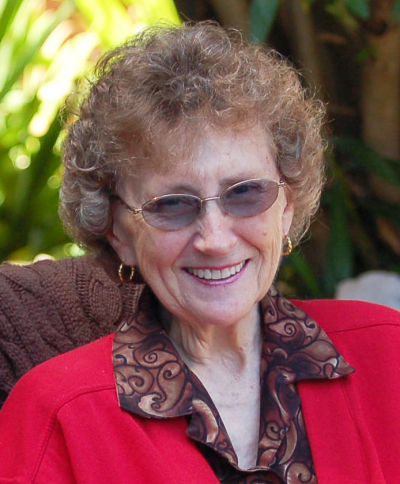 Joyce Frederick, born and raised in Los Altos and the only child of Harry F. Buswell and Gertrude Cooper Buswell, passed away on September 6 at the age of 89.

A member of an early settler Los Altos family that moved out west from New England at the turn of the century and put down roots in the Santa Clara Valley in the early 1900’s, she passed away peacefully in her home in Los Altos with family members at her side.

A classically trained pianist and accomplished soloist singer, Joyce was born during the Great Depression years. Her paternal grandmother was Edith May Berry, a member of an early Los Altos family that moved here from Maine in the late 1890s and that included Edith’s older brother, Charles Ezra Berry, who owned and operated the historic livery stable in Los Altos.

After World War II, during the last two years of high school, she took piano lessons from Kato Mendelssohn Reis, the famous composer’s granddaughter. She studied music and singing at San Jose State University (then known as San Jose Normal School) and later attended Stanford University on a music scholarship where she continued her piano training. A winner of numerous singing competitions, she appeared as a soloist with nationally known Jack Fina’s 16-piece band at the well-known Adobe Creek Lodge in Los Altos Hills and was poised to enter the music world professionally.

At the age of 19 she met her future husband Robert (Bob) L. Kidder through her friend Faye Kidder. Bob was an athlete and named a high school All-American in swimming at Sequoia High School. They were married at the Stanford Memorial Church in Palo Alto on August 31, 1952.

She worked briefly at Hewlett Packard before devoting herself to being a full-time mother to her two daughters, Cheryl and Kathleen. She also volunteered as a member of the Assistance League of Los Altos during the 1960s.

In 1970 Bob received his Ph.D. from Stanford in civil engineering. After his untimely death in 1975, Joyce remarried in 1977 to Donald (Don) Merritt Frederick of Colorado. They enjoyed several wonderful years together and shared an appreciation of music and sports. Sadly, Don passed away in 1996.

Joyce had many talents, which ranged from singing, to playing classical piano to oil painting and she taught piano for several years to local school children. A loving homemaker and devoted grandmother, she enjoyed gardening and reading.

Music was always an integral part of Joyce’s life. One of her last public performances was playing the piano at Kathleen and Wulf’s wedding. It was not until severe arthritis slowed her down that she stopped playing the piano.

She devoted her life to her family and was proud of her Irish-Scottish heritage. She especially enjoyed spending time with her relatives. She held a special place in her heart for the Langdon family of Gilroy, as well as all of her Cooper, Kidder, and Frederick relatives.

Joyce always had a positive attitude and that was no more evident as when told she needed open-heart surgery at the age of 83, she said, “Let’s do it”. Her recuperation amazed her surgeon, doctors and nurses, all of whom stated what a positive attitude could do for a person’s health.

That positive attitude was put to the test again in 2019 when she noticed a lump in her abdomen. Because of the COVID-19 pandemic, she was not able to have it looked at until late 2020 when it was diagnosed as ovarian cancer. In March 2021, Joyce had surgery that revealed another tumor at stage 3. She completed six cycles of chemotherapy. One week after the last treatment she lost her battle with cancer.

Everyone that knew her will forever remember her beautiful smile and distinctive laugh. As her best friend for 75 years, Betty Sue Naegele, said, “She was the most courageous person I’ve ever known. She was the epitome of what friendship means.”

At her request no services will be held. A celebration of her life will be held at a future date. In lieu of flowers, she requested that you donate to St. Jude Children’s Hospital or your favorite charity.

Photo Gallery
0 photos Upload a photo
Remembrances
0 entries Submit a remembrance
Memorial service
At her request no services will be held.
Make a donation
In lieu of flowers, she requested that you donate to St. Jude Children’s Hospital or your favorite charity.
About this site     Contact us