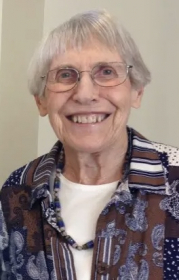 Joyce Tavrow (née Frankel) passed away after a short illness on November 1, 2021. She was a dedicated civic activist, who cared deeply about justice, women’s rights, nuclear non-proliferation, reducing barriers to voting, and ensuring that nursing home residents were not neglected.

Born in Rochester, New York, on May 13, 1930, Joyce was the first among her many cousins to attend college. She graduated with a B.S. from Cornell University in 3 ½ years, and then received her elementary school teaching credential from Brockport State Teacher’s College in 1952. She taught first graders for five years. In 1956, after only 3 ½ weeks of dating, she became engaged to Hillard P. Tavrow, with whom she enjoyed a loving and fruitful partnership for over 65 years. They raised four children together, and she encouraged and inspired all of them.

Beginning in 1958, Joyce was a life-long member of the League of Women Voters. After moving to Woodland, California, Joyce founded a chapter in 1961. Later, while living in San Mateo County, she was nominated to be the president and spearheaded the League’s involvement in school desegregation. In Colorado, Joyce became the president of the state League, where she received the Certificate of Merit for outstanding achievement. She moderated many candidates’ forums and became known for her mastery of the complexity of state ballot issues. In 2020, she tussled with the Wall Street Journal editors over their erroneous interpretation of one measure.

Joyce’s passion for civic education and justice took numerous forms. As a 4-H leader in Portola Valley, California, she introduced a civic awareness program to the Alpine Valley 4-H Club. In Colorado, she served as Director of the Colorado Judicial Institute. In recognition of her contributions, Joyce was appointed by Governor Richard Lamm to serve on the Commission on Judicial Discipline, which reviewed public complaints about judges.

Upon moving to Rancho Bernardo, California, in 1988, Joyce became active in local governance. She was Chair of the RB Planning Board for several years and was inducted into the RB Hall of Fame in 2002. Joyce was also a monthly columnist for the RB Sun for more than a decade, where she wrote about local politics and environmental issues. For twenty years, Joyce was an ombudsman for Aging and Independent Services, where she advocated for vulnerable residents in skilled nursing. At her last home, Moldaw Family Residences in Palo Alto, she was the first chair of the Food Committee and served as parliamentarian for various committees.

Among her many interests were swimming, playing duplicate bridge and mah jong, listening to classical music and Broadway hits, playing piano, and travelling domestically and overseas. Joyce relished the New Yorker magazine, a good novel, a beautiful view, a delicious meal, and being with family and friends. Joyce remembered everyone in her extended family’s birthdays and anniversaries with an original poem or meaningful message. She was vibrant and caring, as well as a devoted grandmother to her five grandchildren (Philip, Xavier, Cameron, Doran and Ruslan) and her step-grandchild, Clayton.

Joyce is survived by her husband, Hillard, and her children, Beth Mahar (Kevin Mahar), Paula Tavrow (Greg Coleman), and Lee Tavrow (Norelle Tavrow). Her daughter Amy Tavrow (Rob Kuchta) predeceased her. She was a cherished sister to Elaine Dolgoff (Lawrence) and Warren Frankel (Risa), and their families. She will be missed, and the world will be lesser without her.

Photo Gallery
0 photos Upload a photo
Remembrances
0 entries Submit a remembrance
Make a donation
Memorial donations may be made to the League of Women Voters Link: https://secure.everyaction.com/vvbqLOQV3U6lYu9CKR5tpQ2
About this site     Contact us