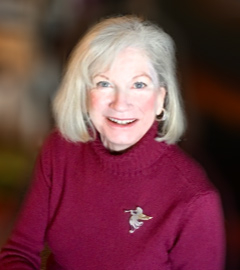 Kathleen Gaffney Braunstein died on September 2, 2021, in Woodside, California, with her children and husband at her side.

Kathleen Margaret Gaffney was born in Los Angeles, California, the eldest of five children born to Thomas and Margaret (Donovan) Gaffney. The family moved to San Francisco after the war, and Kathleen grew up in the Sacred Heart Parish, just west of Hayes Valley. She graduated from Lowell High School, City College of San Francisco, and UC-Berkeley, where she majored in Accounting. Kathleen later earned an M.B.A. from Golden Gate University while working full-time.

In 1976, she met Terry Braunstein on a cross-country flight from BWI to SFO, as both returned from business trips to Washington, DC. The two married in January 1978 and settled in the Skywood neighborhood of Woodside later that year. Apart from 4 years when the family lived in London and Palo Alto, Kathleen resided there until her passing.

Kathleen’s career with the federal government spanned decades, starting in the 1960s as a management trainee with the Social Security Administration. She was subsequently an executive with the Department of Health, Education and Welfare (now known as the Department of Health and Human Services, or HHS), and later, with the US Geological Survey. Kathleen enjoyed being active in the community and dedicated time to volunteering, first for the Town of Woodside, for which she served on the Architecture and Site Review Board and the Planning Commission. Her volunteer work also included providing issues education at retirement communities for the League of Women Voters, more than 25 years as a docent at the Filoli Historic House in Woodside, and more than a decade as a docent at the Asian Art Museum in San Francisco.

Kathleen had a lifelong love of the arts and music. For more than 40 years, she was a subscriber and regular attendee of the San Francisco Opera and the San Francisco Symphony. Her annual birthday celebration featured the San Francisco Ballet’s production of Tchaikovsky’s Nutcracker Ballet – as she could bring her children and later her grandchildren – and this became a cherished family tradition.

Terry and Kathleen traveled extensively together, visiting cultural sites from St. Petersburg to Damascus to Samarkand. This travel was often paired with study or lectures, as when they took a Stanford Continuing Studies course on the Peloponnesian War and then circumnavigated the Peloponnese by car, visiting the sites of ancient Sparta and the Battle of Pylos, among others.

Kathleen’s dry wit was enjoyed by friends and family alike. When feeling underappreciated by her teenage children, Kathleen would occasionally don an ornate silver pin from her travels in Eastern Europe, marking her as a member of the USSR’s “Order of Maternal Glory.”

Kathleen was predeceased by her parents. She is mourned by her husband Terry, her daughter Roberta, her sons Ryan and Shane, her siblings Jeanne Penrose, Thomas Gaffney, James Gaffney and Grace Gaffney, her four grandchildren, extended family, and many friends.

“In lieu of flowers, a donation to the SF Symphony’s Education & Community Programs would be appreciated.” https://www.sfsymphony.org/Donate-Volunteer/Donate

Visitation and a celebration of Kathleen’s life will be held on Saturday, September 11, at Duggan’s Serra Mortuary, starting at 10am. Kathleen was an inspiration to many, and she will be missed.

Photo Gallery
0 photos Upload a photo
Remembrances
0 entries Submit a remembrance
Make a donation
“In lieu of flowers, a donation to the SF Symphony’s Education & Community Programs would be appreciated.” https://www.sfsymphony.org/Donate-Volunteer/Donate
About this site     Contact us