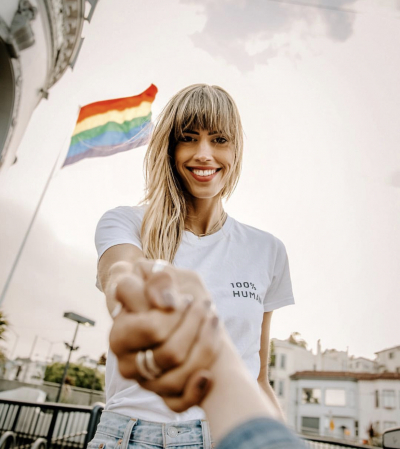 Kendall Elizabeth Shea Chase, 31, of Venice, California, passed away on Monday, May 30, 2022 in Cabo San Lucas, Mexico. Her young and promising life was cut short by a drunk driver.

The essence of Kendall was her sense of style, her love of beauty, and her dedication to making life fun! Her love of friends and family were her biggest priority in life. Her boundless energy took her far in her short life. She made the most of her time on earth and had endless curiosity about the world. She graced us all with her generous smile.

Kendall was born and raised in Portola Valley, California, beloved daughter of Laurie Abbott Chase and Andy Chase. She attended Trinity Preschool, Ormondale School, Corte Madera School, and Menlo School. From an early age Kendall expressed a love of dance and sequins. She was the guiding light for her younger brothers, Patrick and Zachary, and her many cousins. She danced, passionately and constantly, from age two through the end of college. She was a participant in the Bay Area hip-hop dance community, dancing with Funksters SF, and made many friends along the way.

She was excited to attend UCLA because of its diversity and wanted to take advantage of all a big school had to offer. She danced with Ferosha and NSU Modern and was an enthusiastic member of Delta Gamma sorority. Kendall was a member of the Ski and Board Club, perfecting her snowboarding skills as the team traveled and bonded. She graduated from UCLA in 2012 with a degree in Design and Media Arts. Her thesis focused on photography and was a poignant portrayal of the nearby drag queen community.

At the young age of 20, Kendall met the love of her life, Katie Shea, introduced by Katie’s twin brother and Kendall’s Funksters dance team partner, Kyle Shea. They never looked back. They became inseparable partners in love and life. After meeting, Katie and Kendall travelled the world together. Their travel was experiential, and they sought to immerse themselves in every aspect of the cultures they visited; cuisine, design, and fashion all fed their creative spirit. Kendall proposed to Katie in the Boboli Gardens in Florence, where Kendall had spent a semester abroad missing Katie so much. Later and in turn, Katie proposed to Kendall in front of the Castro Theater, with the marquee announcing her intentions to the world. They were married in October 2021 in a ceremony in Chileno Bay where they choreographed a flash mob to their favorite Madonna song as a surprise gift to their guests. The video of their dance struck a chord with and inspired so many people and was viewed over 17 million times worldwide.

Kendall moved to San Francisco after graduation to begin her career in branding and marketing. At that time she began developing her lifestyle platforms on social media, ChasingKendall.com and @ChasingKendall, sharing her personal mode of self-expression and her broad interests with the world. In 2019, Kendall and Katie moved to Venice Beach to see what the creative world of LA had to offer. Spending their days near the beach and enjoying sunset happy hours together, they put down roots in their new neighborhood and reconnected with their college friends.

Our lives are diminished by her passing; she will be sorely missed.