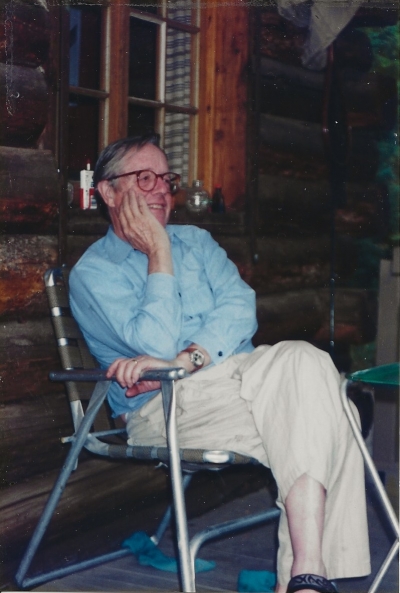 Larry Brown died on May 27, 2020 after a brave battle with Alzheimer’s. He was surrounded by family both in person and by phone. He was born in Bryn Mawr, Pennsylvania, graduated in 1945 from South Kent School and then attended the University of Pennsylvania where he met Wendy Appel on a blind date. He graduated and they were married in 1950. He was a member of the First City Troops of Philadelphia and served in the Korean War in Germany. He worked for Smith, Kline and French in research and development. In 1968, he moved with his family to Palo Alto to head Smith Kline Instruments. After retiring he was instrumental in the creation of the Opportunity Center in Palo Alto, an affordable apartment complex and community service center designed to help individuals and families who are homeless or at-risk of homelessness. In 2006 Larry and Wendy moved to Minnesota to be near their daughter, Maddy and her family. He was a man of many avocations, He piloted single engine planes, took wonderful photos of his family and the many places he traveled with Wendy, navigated their wooden boat in the waterways of the Puget Sound near his daughter Anita and her family, and was an avid tennis player. His family and his many good friends enjoyed his company. He and Wendy had an adventurous and mutually supportive marriage. He will be remembered for his obstinance, his graciousness, his compassion and his sense of humor. He is survived by his beloved wife Wendy, daughter Anita (Robert) Norbut, son Doug (Gail Colby), daughter Maddy (Randy Croce); grandchildren Carla, Iyesha, Matthew, Katie, Eleanor and Carolyn; and nine great grandchildren.

Photo Gallery
0 photos Upload a photo
Remembrances
1 entry Submit a remembrance
From Mary Gagnon
June 4, 2020
Sending loving thoughts to you Maddy and all your family. So sorry for your loss.
Make a donation
https://communityworkinggroup.org/donate/ https://www.nps.gov/getinvolved/donate.htm
About this site     Contact us