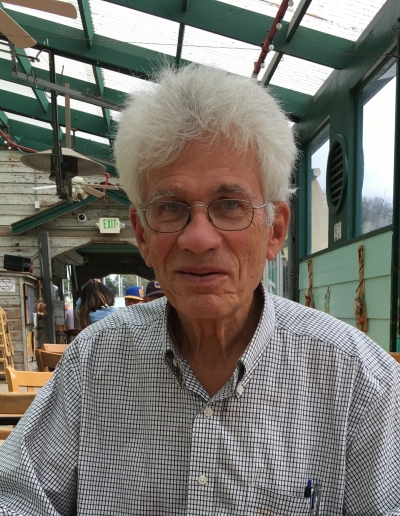 Larry passed away peacefully May 16 at the age of 80 after a profound battle with Lewy-body dementia. His brilliant mind, boundless curiosity, zest for life, unerring moral compass, and generous spirit made him a beacon of light to all who knew him. His legacy includes both professional and artistic contributions for which he was renowned, and a beloved, unique place in the hearts of so many colleagues, friends, and family members.

In high school, Larry’s 3rd place win in Mathematics at the National Science Fair won him a four-year scholarship to Stanford, where he created the first computer animation language and system to coordinate card stunts for Stanford’s football games in 1961 while an undergraduate. In 1965, having moved into the nascent field of computer science, he completed his M.S., a member of the first class in that new endeavor at Stanford. Larry’s work on APL (A Programming Language) and its implementation was a thread for many years, including his first of two stints with IBM. In 1969, he was co-founder of Scientific Time-Sharing Corporation, and in 1972 he co-wrote one of the first worldwide email systems, “Mailbox.” For his work implementing APL, Larry was one of three recipients of the Grace Murray Hopper Award in 1973, which recognized significant contributions from those under age 30. The Computer History Museum, Mountain View, CA, will be archiving Larry’s contributions, especially regarding APL, so significant in the history of computing.

Larry assisted the team installing Christo’s “The Umbrellas” in Southern California in 1990, and “The Gates” in Central Park, N.Y., 2005. The inventiveness of his youth flourished in the artistic triumph of “The Chaotick,” the longest-enduring art installation at Burning Man besides the “Man” itself. His eloquent essay, with a magnificent photo of his creation, can be found online under “Larry Breed, The Chaotick.”

After his first Burning Man experience in 1995, Larry (aka “Ember”) initiated the 1996 building of Black Rock’s “Trash Fence,” a mile-long structure of black netting which effectively kept wind-borne debris, MOOP (“matter-out-of-place”), from escaping onto the playa. Having attended one year with Larry, daughter Emily and son-in-law Nick Baban joined him for four more years at Burning Man in their capacity as Black Rock Rangers. Instrumental in the “Leave No Trace” training of the Earth Guardians at Burning Man, Larry became a Certified Trainer in outdoor skills and ethics for Black Rock City, and edited the festival’s newspaper. He was devoted to sharing with other participants the implement he invented from recycled bicycle wheels. “The Evapotron” facilitates gray-water evaporation, and Larry generously gave workshops all over the Bay Area making this technology available.

Closer to home, each Spring he was responsible for erecting the May Pole and ribbons for Palo Alto’s Bol Park May Fete celebration. He was an avid home gardener with prolific vegetables and fruit trees, which led to years of accomplished guava jam-making, his mother’s tradition. Growing up summers at Fallen Leaf Lake, his love of the out-of-doors acquainted him first with Desolation Valley, then later Death Valley, Big Sur, and Moab. Later, their love of adventure took Larry and Beverly on many more explorations throughout the U.S. in their camper.

Larry’s lifelong love of music involved him in the Stanford Chorus, The California Bach Society, “The DTT Singers,” and a madrigal group. He had carved a pochette, a Renaissance stringed instrument, and built a harpsichord from a kit all before the age of thirty; in high school, he enjoyed playing banjo.

In his teens, Larry raised honeybees and introduced his family to “The Hobbit” at a time when few had heard of J.R.R. Tolkien. All his life he loved Lewis Carroll’s humor and nonsense verse, and the wit of Walt Kelly’s “Pogo” books. He excelled annually at the Dictionary Rally shared by his colleagues at Scientific Time-Sharing Corporation (eventually winning twice, a record) and later in life, did pro bono proofreading for several authors. Having enjoyed family trips sailing on Chesapeake Bay, his love of the sea took him in his retirement on a three-masted sailing ship expedition in New Zealand waters, and culminated in his copy-editing Patrick O’Brian’s “Master and Commander” series.

Ever enjoying a new challenge, Larry embarked on mastering each sub-contractor’s craft in remodeling his home entirely with his own two hands. He observed with wry humor that this meant he was a perpetual beginner at each job—a slow process.

A fascinating entry on “Larry Breed” can be found on Wikipedia. 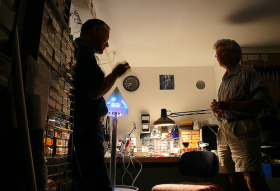 Remembrances
3 entries Submit a remembrance
From Sperry Romig
Sept. 18, 2021
I was thinking about Larry Breed yesterday and Googled his name only to discover that he had passed away in May, which made me very sad. We had been friends seventy years ago in Alexandria, VA, when we were in school. Also we were in Boy Scout...
Read more
Memorial service
A Celebration of Larry’s life is planned for September 12 at 1:00 p.m. at the Computer History Museum, 1401 N. Shoreline Blvd., Mountain View.
Make a donation
Donations in Larry’s memory may be made to Avenidas Rose Kleiner Center, Palo Alto; Mission Hospice, San Mateo; or to the charity of your choice.
About this site     Contact us