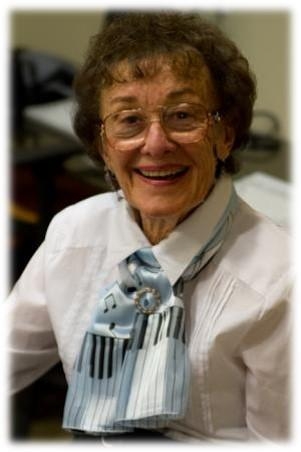 Linda Mankin passed away peacefully in her sleep on June 12.

She was born in 1928 in Yonkers, NY to Russian immigrants. She spoke only Yiddish at home until she entered public school. She played piano from an early age, encouraged by her father, Ephraim Rosenthal, who was a musician and artist.

She received her BA in music education from NYU in 1949, and was named “Outstanding Woman Graduate” from the education department that year. At NYU she met Herbert Mankin, who was studying dentistry there. They married in late 1949. Their first child, Lisa, was born in 1952 in Charleston, SC.

When Herb finished a stint in the army, they moved to the west coast, settling in Palo Alto, CA. They were among the founding families of Congregation Beth Am in Los Altos Hills.

They had 2 boys, Gary (1954) and Kenneth (1959). Thereafter, Linda returned to school at Stanford University, earning her MA in music composition. She directed the Palo Alto Chamber Singers, a madrigal choir, continuing that role into the late 60’s.

When Herb retired, she followed suit. She took up playing jazz, performing with several bands, and she continued to lecture and write about music until he passed in 2007. In 2009, she moved to the Moldaw Family Residences in Palo Alto, taking the reins of the Moldaw Singers for a decade, enriching the lives of residents there with biannual concerts, each on a unique theme.

She spent a good deal of time there with Julius Blank, one of the so-called Traitorous Eight engineers who created the first integrated circuit at Fairchild Semiconductor. He passed in 2011, and the next year she met Professor Thomas Rossing, who was still teaching at Stanford, and is an expert on the physics of musical instruments. They enjoyed musical and arts events together.

Even after retiring from directing the Moldaw Singers, Linda continued to play and lead singalongs at the Moldaw until the very end. She also gave impromptu duet performances with her neighbor, guitarist Al Dorogusker.

She is survived by her children (Lisa, Gary and Ken) and their spouses, 6 grandchildren and 11 great-grandchildren. She would have encouraged charitable contributions be made to needy public school music programs.