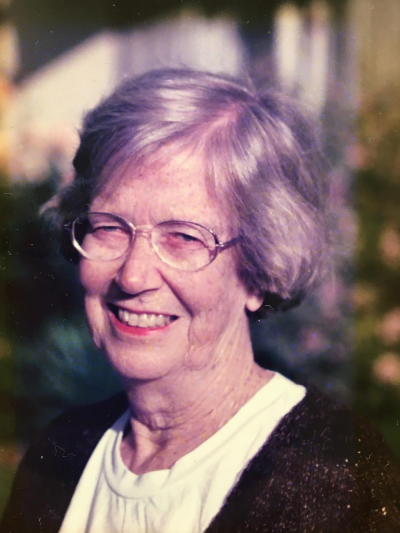 Margaret, Marnie, Marg, Mom, Mum, Grandmarg, wife of Paul B. Green (1931-1998), mother of Robert (Ann), Peter (Rebecca) and Kate; grandmother to Nancy(Albert), Stephanie, Amy, and Jenny, Stewart, Jessie, and Grace, Fiona and Miranda, passed on December 10 after a brief illness. She was 88.

Margaret was born in Hamilton, Ontario, Canada to W. Gordon and Jessie E. Cornett (Ewart) in October 1933, a younger sister to Dr. Robert W. G. Cornett (1928-2003). Her life long love of lakes and mountains began as a young girl while her father was a summer camp doctor in the 1940’s. Margaret and her mother were able to spend the whole summer canoeing and swimming in various parts of Eastern Ontario. As a teen, she attended Glenn Bernard Summer Camp in Algonquin Park.

Margaret was a true renaissance woman, excelling in everything she turned her hand to, most notably the sciences. She was the only woman to graduate with a Major in Biology in her class of Queen’s Art and Science 1955. Deemed the most promising woman graduate that year, she was awarded the Marty Scholarship to begin a Ph.D. at Radcliffe College, Harvard. Around the labs, she met Paul and after an outing to a professional hockey game (her first), and a hike, the future was pretty clear. They married in 1957 and departed for 18 months based in Zurich where Paul had a postdoctoral position.

The travel theme got a good start in those years: they skied and hiked and drove all over Europe. By 1960, they were back in the US, and started family life with the arrival of Robert, Peter and Kate. In 1970, the family moved to California, settling at Stanford where Paul was a Biology Professor at Stanford University. With a number of sabbatical leave years (New Zealand, Australia, England and Belgium) Margaret kept all the logistics, flights, moves, kids activities and her own interests well in hand. An avid wool spinner, knitter and later on a lace maker, Margaret belonged to many craft, service, and book clubs and was a 30 plus year member of the Choir at the First Congregational Church of Palo Alto. The American Association of University Women (AAUW) was a particular anchor for her interests and activities in later life.

The home of Paul and Margaret and their children was often full to overflowing with visiting students or researchers or friends from abroad. A constant flow of oatmeal waffles was available on Saturday and Sunday mornings in the big kitchen with its view of the hills to the west of the Stanford Campus. Long and adventurous or short and relaxing hikes to peaks and viewpoints in the Sierras were enjoyed by all over those many years.

Many visitors to the home on the Stanford campus would have seen the famous “map” with a coloured pin for the places each family member (children, inlaws and grandchildren) had travelled. Margaret had a pin in 78 countries by best estimate – and had pictures, slides, crafts and a t- shirt from almost every one. Most of her travel was with Paul, and after his passing, with lovely family and friends. His memory was with her on all travels, and indeed everyday.

A proud dual citizen since 1974, Margaret kept deep and daily connections to Canada via her extended family of in-laws, cousins, nieces, nephews, great-nieces and great-nephews. Maple leaf shaped earrings were her talisman on airline flights. A Canadian flag was always somewhere in the house and her room.

Donations to celebrate Margaret’s life and love of the outdoors could be made to the Jasper Ridge Biological Preserve, where she was a docent for many years, or to anyplace near to you that cares for wildlands.

Photo Gallery
0 photos Upload a photo
Remembrances
2 entries Submit a remembrance
From Colin Goodall
Jan. 8, 2022
I was one of those fortunate graduate students who found a warm welcome at the home of Margaret and Paul Green. My brother and I rode a motorbike from the East Coast. Anthony flew back to Wales, Paul and Margaret found a parking place for the bike a...
Read more
Memorial service
A Memorial Service is planned for Saturday, January 8, 2022, at 2:00 p.m. PST at the First Congregational Church of Palo Alto, 1985 Louis Road. Those joining us on Zoom can connect at https://zoom.us/j/670796753?pwd=cTBiY0toMUl1ZEZaK0ZETjU0YitJZz09.
Make a donation
Donations to celebrate Margaret’s life and love of the outdoors could be made to the Jasper Ridge Biological Preserve, where she was a docent for many years, or to anyplace near to you that cares for wildlands.
About this site     Contact us