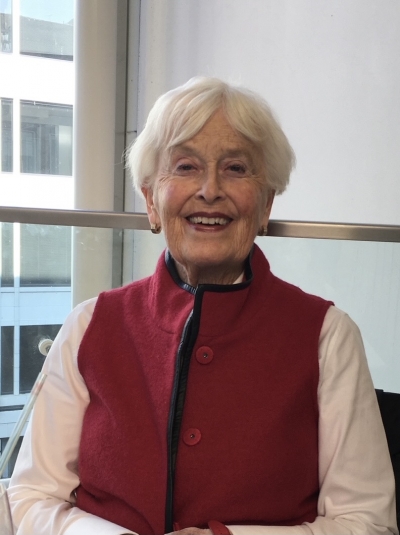 Mary Emily Wurtz passed away on April 20, two weeks before her 84th birthday. Mary cared deeply about making the world a better place and helping others. She loved spending time with her family, exploring nature, and enjoying and promoting the arts. Mary is survived by Don, her husband of 64 years; her children Brad and Katie; and her four grandsons Zachary, Henry, Leo, and Aidan. Her gift of curiosity and interest in others allowed her to make new friends wherever she went.

Mary was born in Seattle, moved to Palo Alto at age three, started school at Miss Harker’s School (later, Harker Academy), and continued on to Jordan Jr. High and Palo Alto High School. Mary attended the University of Colorado at Boulder, where she studied Education and met Don. They were married on Sept 15, 1956. After graduation, Mary and Don moved back to Palo Alto, where Mary taught 2nd and 3rd grades at Hillview Elementary School in Menlo Park before leaving to start a family.

Mary was always active in social and political issues and worked as an avid volunteer while raising her children. In the mid-70’s Mary devoted her time to Project Survival, and also devoted more than twenty years to founding and expanding Beyond War, a Palo Alto-based organization devoted to ending war on the planet.

Between 1989 and 1996 Mary and Don lived in Washington DC, where Don served as an appointee in the Clinton administration, including stints at the General Accounting Office (GAO) and Department of Education. While in DC, Mary studied photography, an interest that blossomed into a new vocation. Whether in black-and-white or color, Mary’s photographs reflected her passions: people, wildlife, and nature. Mary also worked as a volunteer in the correspondence office of the Clinton White House and T.H.I.S., an organization established in 1961 during John F. Kennedy’s presidency to welcome and orient newly appointed foreign diplomats and their families to Washington, D.C. and life in the United States.

Mary and Don returned to California in 1996 and lived in Carmel for the next 20 years. While in Carmel, Mary helped found El Sistema Salinas, which launched the Youth Orchestra of Salinas, where she served on the Board of Directors for more than 10 years. Mary also co-authored a children’s book, “Cleopatra, Queen of Pebble Beach,” to raise money for the SPCA. For many years, Mary’s favorite annual tradition was attending the Sun Valley Writers’ Conference, a gathering that combined her love of the natural beauty of the mountains, books, and culture.

Mary and Don returned to the Bay Area in 2016, moving into The Forum in Cupertino. As she had her whole life, Mary became active in the Forum community, where she made many new friends and created Reader’s Theater, a program for residents to produce and participate in readings of plays for The Forum community.

Photo Gallery
0 photos Upload a photo
Remembrances
0 entries Submit a remembrance
Make a donation
For those so inclined, Mary’s favorite charities were the El Sistema Youth Orchestra and the Environmental Defense Fund.
About this site     Contact us