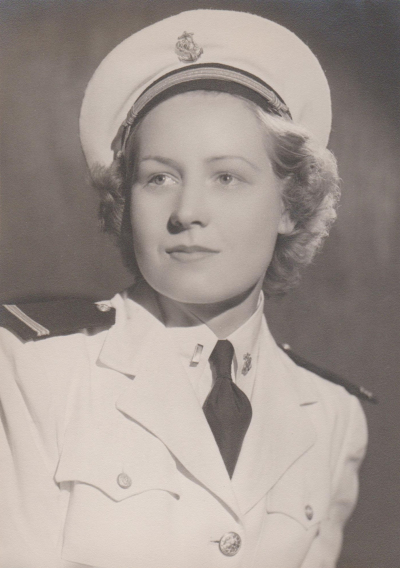 Mary Frances (Raple) Smith passed away gently in her home in Palo Alto, CA on December 5, 2021. She was 101 years old, and led a full life filled with family, love, and prayer.

Mary was born on September 25, 1920, and grew up on a farm outside of Andale, KS during the Great Depression and Dust Bowl. She went to school in a one-room schoolhouse. After graduating from high school, she enrolled in nursing school in Wichita, KS and joined the U.S. Navy. She completed bootcamp and nursing training in Balboa Hospital in San Diego, CA. Later, she achieved the rank of lieutenant, while serving in Pearl Harbor, HI. After WWII ended, she was transferred to US Naval Hospital in Memphis, TN where she was honorably discharge from the US Navy. She returned to Wichita and worked at the VA Hospital. She returned to the Navy during the Korean War. While stationed at Mare Island in Vallejo, CA, she met her future husband Ray Smith and they started a family in San Francisco, CA. They eventually settled in Palo Alto, where Mary became a full-time homemaker while raising their three children. She later returned to school to renew her nurse’s license, and then worked as a nurse at the Palo Alto Nursing Center for 20+ years.

Mary is survived by her children Gail Enyeart and husband Jack; Roger Smith and wife Maria Lilibeth and Daniel Smith and wife Nancy and grandsons; Christopher and Bradley Smith.

Mary will be best remembered as a soft-spoken, kind, and thoughtful person, who enjoyed baking with her grandsons, reading the newspaper, sewing, completing word search puzzles, and taking walks with her neighbors. She had a lovely garden that won a “Best of Palo Alto” landscape. Her family and Catholic faith were the most important aspects of her life. Mary is dearly loved and will be sadly missed, and her kindness, love and support will be with us forever.

Photo Gallery
0 photos Upload a photo
Remembrances
0 entries Submit a remembrance
Memorial service
She was laid to rest in a private service at Alta Mesa Memorial Park in Palo Alto, CA on Dec. 13, 2021.
About this site     Contact us