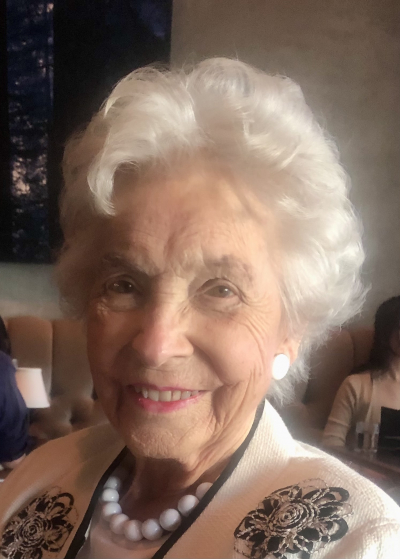 Mary Helen Armstrong passed away peacefully on October 26 at the age of 94 after a long and successful life as an impressionist artist devoted to her family and political and social causes. Deeply admired and beloved by all who knew her, Mary Helen lived her life with intention, generosity and humility. It will come as no surprise to those who knew her that in her final days, she spent every waking moment organizing a show of her remaining art to raise money for charitable causes she holds dear.

Mary Helen was born in New York City, the daughter of Henry Morgan Post and Mary Riker Haskell Post. She grew up during the Great Depression and attended The Chapin School and Parsons School of Design, where she showed significant artistic promise. In 1945, she met Conrad Gustav Hürlimann, a dashing businessman from Zürich, Switzerland, and they were wed in 1949. In the following decades, she devoted herself to raising her family and serving as a volunteer leader both on political campaigns and for the Red Cross. She was also deeply committed to Carver Center, a community center founded by African American parents in Port Chester, NY, where she helped raise the funding to substantially expand their programs and buy their first building, and she remained a steadfast supporter throughout her life.

Only in 1971, when her beloved Conrad died of pancreatic cancer, did Mary Helen return to her art. She began with pastel portraits but quickly moved to garden and landscape watercolor and oil paintings reminiscent of Monet and the Impressionists. She remarried in 1977 to John C. Armstrong and began painting under the name MH Hurlimann Armstrong. As her paintings grew in popularity and were more broadly reproduced, she partnered with her daughter Mary Ann to create Hurlimann Armstrong Studios, producing beautiful cards, mugs and products that featured Mary Helen’s art alongside similar artists. She continued to paint – and experiment with different styles and approaches – throughout her life. Her paintings hang in the Bruce Museum in Connecticut and the Farnsworth Museum in Maine, as well as in the homes of collectors across the country.

Later in her life, Mary Helen separated from John and moved to California where she met George Cator, who was her constant companion and dearest friend later in life. She became an active member of the Menlo Park Rotary, the Woodside-Atherton Garden Club, and Trinity Church in Menlo Park. She taught art to veterans at the VA Hospital and moved into The Vi in Palo Alto, where she sought to create new dining opportunities with the M&Ms and was a dedicated member of The Flamingoes.

Mary Helen is survived by her three daughters, Mary Ann Hurlimann, Lily Hurlimann, and Sandy Hurlimann Herz, whom she described as her three greatest masterpieces, and their partners James Bassett and Peter Herz. Additionally, she is survived by six beloved grandchildren – Eric Perret, Cassandra Perret Solberg, Brandon Bassett, William Bassett, Henry Herz, and Conrad (Jack) Herz – and three great grandchildren – Wesley Bassett, Alexis (Lexi) Bassett, and Logan Solberg – who collectively were the light of her life. She cared deeply for the children and grandchildren of both John Armstrong and George Cator and was exceptionally fond of Andrea Herz, all of whom she considered extended members of her immediate family.

A memorial celebration for Mary Helen will take place in early January at The Vi in Palo Alto.

Make a donation
In lieu of flowers, the family invites donations in Mary Helen’s memory to Carver Center, Fountain House, and California Clubhouse, all of which held a special place in her heart. https://carvercenter.org/ https://www.fountainhouse.org/ https://californiaclubhouse.org/
About this site     Contact us