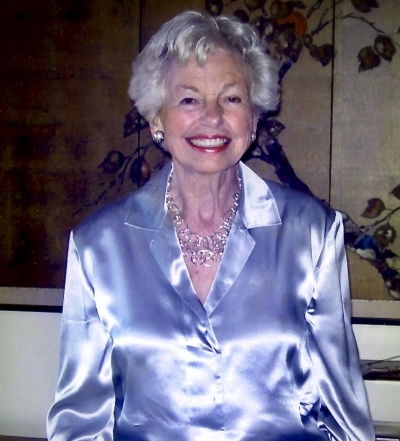 Mary Lou Carlsen passed away peacefully on April 23, 2021 at the Vi seniors facility in Palo Alto, where she resided for 15 years. She was 98 years old.

Born Mary Louise Martin in Hanford, California on August 15, 1922. Her Central Valley roots ran deep and were a source of considerable pride. Following his service in the Civil War her beloved great grandfather, Claude Giddings, settled in Visalia where he would become a founding member of the emerging local business community. In 1891, Mary Lou’s grandmother Blanche “Mimi” Giddings  married James Hickman. They moved to Hanford where James became a fixture in the local banking industry. In 1892, Mimi and James gave birth to Mary Lou’s mother, Nadine. Mary Lou’s father, Robert Martin, hailed from the mountains of rural Kentucky, which was also a source of pride. It bears mention that like grandmother Mimi and mother Nadine, Mary Lou was an only child and a strong female.

Mary Lou attended UC Berkeley where she was a member of the Sigma Kappa sorority. It was at Berkeley that she met her future husband, Carl Carlsen. The couple was married in 1946 and made their home in Pacific Grove, Marin County, and later in Woodside and Portola Valley.

Carl and Mary Lou loved to travel and spent many happy years boating in Mexico and the Pacific Northwest. Mary Lou’s adventurous spirit was evident in her hiking the Colorado Trail with friends, her trekking to remote parts of Canyonlands National Park in Utah, and her various visits to Mayan Indian villages in highland Guatemala. Mary Lou was also an avid bird watcher and enjoyed her birding expeditions.

Mary Lou and Carl were longtime members of the St. Francis Yacht Club. She was a member of Menlo Presbyterian Church for many years. Mary Lou is preceded in death by her husband of 59 years. She is survived by daughter Kristin (Gary) Wheeler, son Robert (Gail) Carlsen, daughter Leslie (Rich) Tincher, grandchildren Wade, Daniel, Maya, Katherine, Laurel and great grandchildren Torrik, Woodson, Coen, Quincy, Reese. She will forever live in our loving memories.