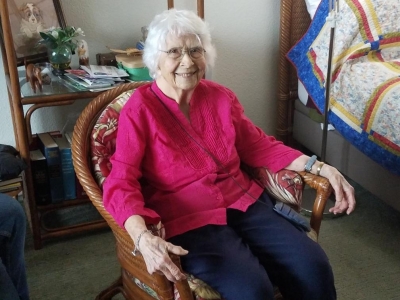 Maryann (Elkins) Coulson passed away March 24th 2020. Maryann was born to Mary (Trowbridge) Elkins and Edgar Arden Elkins on April 14th 1923 in Aurora, Colorado at Fitzsimmons General Hospital. Maryann grew up in Sherman Oaks California, graduating from Van Nuys High School in Los Angeles. She had a lifelong interest in medicine and science. She graduated from UCLA with a degree in Bacteriology in 1947. Maryann was united in marriage to Dale M. Coulson in 1943 at The First Congregational Church of Glendale. California. They eventually settled in Palo Alto, California raising 2 daughters and one son. Maryann and family lived on East Meadow Drive in Palo Alto for a few years, and then moved permanently to Colorado Ave. in Palo Alto. After raising her children, Maryann went back to school for graduate work at California State University Fresno, completing her Master’s Degree in Social Work in 1973. She then started a long career helping disadvantaged children and others for Santa Clara County Department of Social Work. She had many friends from work, and often remembered her friends from there in her later years. She eventually retired and lived at the family home on Colorado Ave. in Palo Alto for many years. During these years she took many trips with friends seeing the world. Among her travels were: Alaska, Argentina and Chile, British Columbia via rail, Canadian Rockies hiking, Costa Rica, Galapagos Islands, Greece, Kenya, Mediterranean, Morocco, Nepal, New Zealand, Panama Canal, and Scandinavia. She moved to Channing House in Palo Alto in 2005 and was joined there by her younger brother Edgar A. Elkins who moved in somewhat later. She often spoke of how good it was to be at Channing House, and how great the staff was, from care takers, to cafeteria staff, to front desk, to cleaning and maintenance staff, to nursing staff, they were all greatly appreciated and helped her live a very long life. She also greatly appreciated her primary care physician who was a kind advocate for her and she appreciated all the other doctors and health care professionals that helped her along the way. Maryann is survived by her three children: Florence Coulson March (Gettysburg, PA) (Debbie March), Barbara Coulson (Redwood City, CA), and Eric Coulson (Chico, CA) (Amy Chen), and by her brother Edgar Elkins, and grandchildren: Connie (Tarbox) Windish (Lance Windish), Winston Tarbox, Benjamen Coulson, and Jesse Coulson, and by her great grandchildren: Parker Windish and Alice Windish.