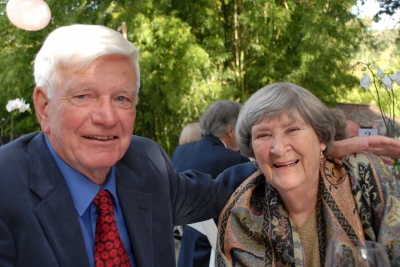 Dr. Murray Walker died of complications from Covid-19 December 26, 2020. A Palo Altan since 1957, he was a partner with Associated Anesthesiologists and practiced for over 30 years at Stanford Hospital. Born in Canada, he finished Northwestern medical school in 1949, married Kay, a young teacher and artist. They moved to Tacoma, Washington in 1950 where he completed his anesthesia residency. Drafted into the army, he traveled to Germany in 1952 and later moved Palo Alto to raise a family.

Murray volunteered with Dr. Don Laub’s Interplast program – piloting his own aircraft to central Mexico to bring supplies and himself to support one of Interplasts’ first teams that brought free life-changing plastic surgery to indigent populations. He also helped Dr. Norman Shumway’s first heart transplant team practice on animals prior to humans. Murray served as a clinical instructor in anesthesia for Stanford. Known for his sense of humor, Murray was a controversial personality and was described as more bark than bite -- occasionally gruff but always fair, and an excellent anesthetist especially when it came to giving epidurals. Workmates had a chance to strike back during his retirement roast with some hilarious memories at his expense. He particularly enjoyed his parting gift: a wind-up toy gorilla that would stomp and roar harmlessly.

An avid golfer, he loved Stanford and Pasatiempo courses. He considered his great achievements breaking 80 at Stanford and playing St. Andrews in Scotland. Murray continued to play until he was 88, after which he gave up keeping score and laughingly referred to it as his “so-called golf game”. His second love was Bridge. He learned the game from his mother who asked the 6-year-old to fill in during breaks with a warning: “Do not lose my hand!” Sadly, he had to give up Bridge at 92 due to a failing memory. But even then, Murray continued to challenge the computer to a game.

Despite his active pursuit of many other sports, he didn’t believe in exercise for its own sake and was heard to say: “When I see a smiling jogger, I’ll take it up!” In his last years, Murray outwitted many age-related obstacles through perseverance, humor, and his ‘wily ways’. His family continues to be inspired by the memories of his unflagging devotion to wife Kay who suffered from Alzheimer’s for 10 years. He is survived by 3 children, 6 grandkids, and 10 great-grandkids.