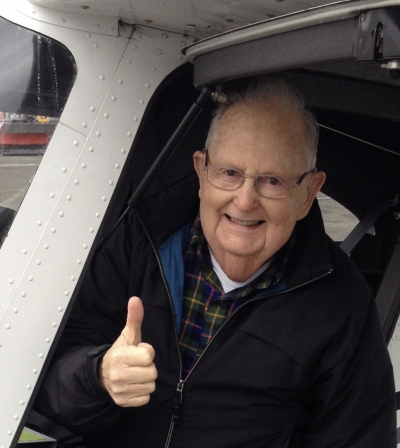 Peter Quarré passed away on June 9th after a long battle with Parkinson’s disease. Our Dad was a friendly, happy, fun-loving guy. We miss him tremendously.

Pete was born in San Francisco, CA to Oz and Catherine Quarré and was the fourth of five children. He was reared in San Francisco and went to Catholic school until just before high school when his family moved to Paicines, CA. The Quarré ranch grew walnut trees and raised livestock.

Pete enlisted in the US Air Force in 1949. He was a staff sergeant and worked as an aircraft mechanic and flight mechanic on the C-54 aircraft.

Shortly after Pete completed his Air Force commitment, his cousin arranged a date for him with her beautiful fellow grade school teacher, Rita Bettini. The attraction was instant.

Pete and Rita were married in 1955 at the Church of the Nativity in Menlo Park, CA and soon had three sons, Richard, Bill, and Steve. They raised their children in Menlo Park with extended family nearby. The Quarré home was always celebrating something and filled with grandparents, aunts, uncles, cousins and neighbors. Pete was happily involved with the boys, helping coach Little League baseball, fishing and camping trips, and leading Cub Scout outings.

During the early years, Pete worked at his brother-in-law’s gas station before beginning a 20 year career as an aircraft mechanic for United Airlines at their maintenance base in San Francisco. He developed an interest in all forms of transportation, including airplanes, trains, trucks, farm equipment, ships, motorcycles, and bicycles. Later, he would instill his interest in flying in his eldest son and grandson. This photo of Pete was taken on a flight he enjoyed with his grandson, Ross Quarré. Though Pete enjoyed all things mechanical, his true passion was sailing and boating.

While his boys were growing up, Pete acquired his Coast Guard captain’s license. He crewed numerous charters, including two lengthy trips. On one trip, he sailed a large sailboat from Hawaii to the West Coast, and on another outing, took a motor yacht through the Panama Canal.

In 1990, both Pete and Rita retired and moved to Washington State to be closer to their sons’ families. They settled in Kirkland where both made friends and found volunteer opportunities. Pete offered years of service to the Kirkland Police Department and Holy Family Parish.

Pete and Rita traveled often and enjoyed trips to Alaska, Mexico, Europe, Australia, Central America, the East Coast, and many road trips across the United States. They especially loved the summer months spent boating and vacationing with the grandkids on beautiful Lake Chelan.

Dad, Grandpa, Great Grandpa will be remembered for the way he loved life and had fun…lessons we will cherish.