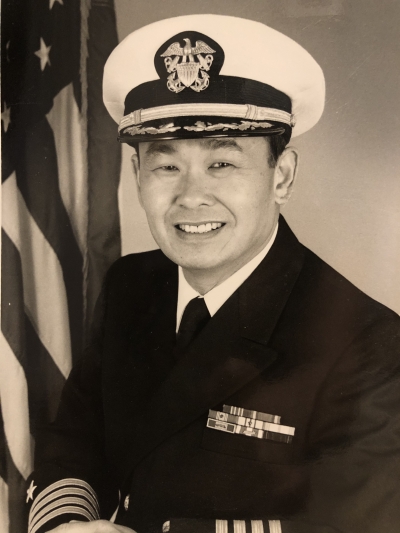 If you ever met Peter Lee, you would know. You’d remember his smile, his humor, his unique charm, his blunt honesty. You always knew where you stood with Peter. And you could always count on him for a laugh. Despite his small stature (which he claimed to be 5’7” but was more like 5’4”), he had a huge presence.

Peter was born in Watford Herts, England, on June 30, 1942, to Tuh Yueh Lee and Zoen Nyok Shen, both from Shanghai, China. He grew up in Larchmont, New York; attended Phillips Academy Andover and Princeton University; and completed his A.B. at Stanford University. He earned his M.S. from Rensselaer Polytechnic Institute, where he met Mea Lee (yes, same surname) and swept her off her feet. After only knowing each other for two months, the two eloped in Miami, Oklahoma. As Peter would say, this December 23rd would have been “55 years of bliss.”

Peter was proud to have served in the United States Navy. He served in two wars, Vietnam and Desert Storm, and in the Navy Reserve for 30 years from which he retired as Captain 0-6. He was an active volunteer at the VA Palo Alto — and an avid shopper at the Navy Exchange! Peter built a career in executive compensation, starting at Bell Systems (now AT&T) where he worked for more than 25 years. He tried to retire three times and finally did so after holding executive positions at the University of California in the Office of the President and Catholic Healthcare West.

Peter’s most proud and beloved accomplishment was his family. First and foremost, his wife and soulmate, Mea. And his two daughters, Christina Vo and Maya Watts. Peter and Mea moved to Menlo Park in 1982 to raise their girls and have resided there ever since. His love — and fierce protection of his family — only continued to grow with his grandchildren, Eleanor Vo (15), Jordan Vo (13), Mea Watts (8) and Meilani Watts (6); and his two sons-in-law, Tan Vo and Keith Watts. His favorite adventures included skiing in Tahoe (where he taught both Christina and Maya), family trips to Hawaii, and regular golf outings with his buddies. Peter was with all of his grandchildren and family for the last time in his home on Meilani’s 6th birthday, May 24, 2020.

While Peter’s exact cause of death is still uncertain, he contracted sudden acute lung complications that his care team believes was triggered by one of his heart medications. Up until then, Peter had been successfully battling heart disease, including coronary artery disease, atrial fibrillation, and most recently cardiomyopathy, specifically amyloidosis. But after 4+ weeks at Stanford Hospital, fighting the lung complications, he died on the morning of May 31, 2020. During that stay (which was particularly excruciating given the COVID-19 no-visitor policy), Peter never once let go of his positivity and his fierce fight to live and be with his family.

While he now joins his sister, Ruth Lee who died in August 2018, Peter is survived by his sisters, Felicia Istel and Vivienne Tooman, in addition to his family members named above.

Peter left a gaping hole that will never be filled. All who knew him — whether for 70+ years or for 5 minutes — will never forget him. His love, his opinions, his priorities were unambiguous. He will be forever remembered for his smile, his jokes, his many sayings, his many many neuroses, and his sheer will.