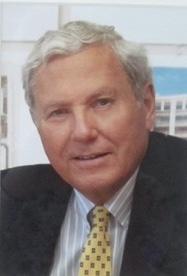 Noted bay area architect, Richard Bruce Campbell, 82, died suddenly on September 16 in Davis, California. Richard (“Dick”) was born March 29, 1937, to Richard and Ethel in Des Moines, Iowa. The family, including his twin brother Robert, and sister, Kathleen, moved to Ames, Iowa, where Richard Sr. was part of the Botany Department at Iowa State University. An Ames High School graduate in 1955, Dick won an NROTC college scholarship. His choice of college was ISU where he excelled in scholarship and leadership. Dick was a member of Phi Delta Theta fraternity. At graduation in 1960, Dick received a Bachelor of Architecture degree and a Navy Commission in the Civil Engineering Corp. In the summer of 1960, Dick and his childhood sweetheart, Marcia Wilsie of Ames, were married. They traveled to Hawaii where Dick’s first tour of duty as a CEC officer was serving on the staff of DPWO 14, Pearl Harbor. He worked as a project manager throughout Hawaii and the South and Western Pacific. Following his tour of duty, the couple settled in California where Dick was named Vice President of Reid and Tarics Associates in San Francisco. His work led him to Palo Alto, serving as CEO of Hoover Associates for the last 33 years. The couple spent 50 years in Los Altos, California, raising three children and where they were members of the Portola Valley Presbyterian Church. During these years, Dick was active in raising money for the Children’s Hospital Woodside Atherton Auxiliary creating backdrops for Tally Ho events. In 2017, the couple moved to University Retirement Community in Davis, California, where they are members of the Church of St. Martin’s.

A celebration of Dick’s life will be held at 1:00 p.m. on Saturday, October 26 at the University Retirement Community led by Pamela Dolan, pastor of the Church of St. Martin’s in Davis, California. An additional memorial is planned to celebrate Dick’s life at 11:00 a.m. on Friday, November 29 at the Portola Valley Presbyterian Church in Portola Valley, California.