Riley went to Castro Elementary School, Jordan Middle School, Los Altos High School, and San Jose State University as a Computer Science major. Riley struggled in college, and left after his first year. Seeking independence, living on his own, he had a brief career as a butcher, which paid off his debts and worked up his savings as he considered his other career possibilities. Riley was just getting started in life, almost 22. The isolation of his last few years were hard on him. He was hospitalized for a non-covid infection, and then passed away suddenly soon after being released.

We loved his sweet, curious, nature. We remember him rock climbing, backpacking, cooking, dancing, and playing guitar. He loved singing in choir, and reading. He had broad interests in music, history, science, gastronomy, languages, computers, and gaming. When we were looking for Riley we could find him with a book, in a tree, sound asleep.

Riley was the twin brother of Kate Alma Griner, and child of Thomas and Rebecca Griner. He had a large, close-knit, local family. He is also survived by his grandparents; Clark and Kathryn Akatiff, Thomas E. Griner Sr.; his aunts and uncles; Jennifer Gonsalves, Mike A. Akatiff, Robert Griner and Margaret McConnell, Ellen and Paul Coker, Mary Cudahy and Sean Collier, his cousins; Ty Mayer, Finn Mayer, Alex Coker, Gabriel Coker, Brennan McConnell-Griner, Joseph Cudahy, Emma Cudahy, and M. Clayton Cudahy. He was preceded in death by his grandmother Christine Griner, and his beloved cat Meander. 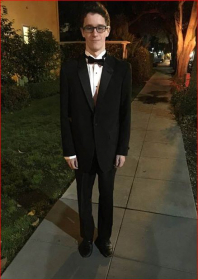 Remembrances
5 entries Submit a remembrance
From Tyler
Nov. 29, 2021
I didnt know Frosty that well, but what I knew of him was someone who was very kind, he only ever wanted good things from people. I didnt speak to him much but, I regret not getting to know him better. Rest well Frosty, you are, and always have b...
Read more
Memorial service
Services will be private. If you wish to attend a public service in summer 2022, please email [email protected]
Make a donation
Kindly no flowers at this time. In memory of Riley’s passing, please take extra care of yourself.
About this site     Contact us