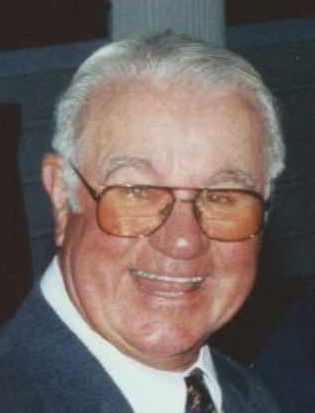 ROBERT FRANCIS O'NEIL ("Boots") February 23, 1924 â€“ March 5, 2016. Bob passed away quietly in his home in Woodside. He is now reunited with his beloved parents, Fred and Alice, his adoring sister Pat Yates and his namesake nephew Bob Yates.

A native of San Mateo, he attended St. Matthew Catholic School, which was the foundation for a lifetime of devotion to the Catholic faith.

He later graduated from San Mateo High School and began his college years at San Mateo Junior College, but soon enlisted in the U.S. Navy. He was proud to have served during World War II as an aerographer's mate, where he was stationed principally in the Pacific.

After returning to the states, he attended college at San Jose State and U.C. Santa Barbara. Upon his graduation, he was able to combine his lifelong passion for horses with a career that spanned over 50 years with the California Racing Association, mainly at Bay Meadows.

Boots was a great favorite with the track fans and coworkers alike, as he happily filled various racetrack jobs starting as a runner and working his way up to money room manager and mutuel/facility manager. He was lucky to have made lasting friendships as he traveled to various tracks around the state fair circuit in the summers. His involvement in the horse community grew after his move to Woodside in the 1960s, where he was a resident for the past 50 years, breeding the occasional thoroughbred for the races.

He was involved in many of the activities that center in Woodside; he served for many years as a board member of the Woodside Trail Club, was an active trail rider, hunted with the Los Altos Hunt, served as announcer at various horse shows, helped with the Los Altos Pony Club, and assisted annually at Woodside's Day of the Horse.

He has been honored by the Town of Woodside as 2006 Horseman of the Year, in 2009 by the Day of the Horse, by the San Mateo County Mounted Patrol, and most recently as a legacy recipient of the Town of Woodside as outstanding contributor to the horse world in Woodside. Bob's horse and professional connections with show business included being interviewed in 2003 for the documentary "Seabiscuit: The Story Begins in San Francisco." Bob appeared in "Bay Area Backroads," featuring the trails in Woodside, and also appears in the 2011 film "The Last Days at Bay Meadows" as a commentator.

Other pastimes included rooting for his favorite teams, the Giants and 49ers, with friends who would stop by for a visit. He is survived by nieces Jean Yates, Joan Yates, Judy Kawamoto (Lester), and Kathy Ramsey (Dave) along with his great-nieces and nephews and many cousins. He will be missed by his longtime friend and companion Katy Farquharson and the multitude of friends who will miss sharing stories and laughs with Boots. The family would like to thank Bob's caregivers Petrut, Jeff and most deeply, Kirk Caverly, for their care and companionship.

Photo Gallery
0 photos Upload a photo
Remembrances
1 entry Submit a remembrance
From joe bertolucci
March 12, 2016
I worked with Robert or boots for many years as a pari-mutuel clerk looking back I don't know how he put up with me.but he was very kind to me.we only come around once in this lifetime but Robert oneils legacy will live on with those people who were ...
Read more
Memorial service
There will be a Visitation on Sunday, March 13, at 4:30 p.m. with a vigil beginning at 6:00 p.m. at Sneider and Sullivan in San Mateo. Funeral Mass on Monday, March 14, at 10:00 a.m. at St. Matthew Catholic Church, 1 Notre Dame Avenue, San Mateo.
Make a donation
In lieu of flowers, contributions in Bob's name would be welcome at the U.C. Davis Center for Equine Health; tel: (530) 752-6433 | e-mail: cehadmin@ucdavis.edu
About this site     Contact us