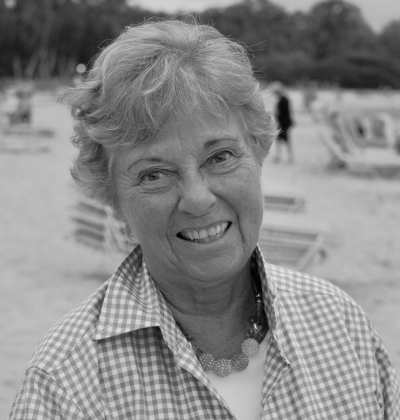 Sara was born in Traverse City on March 17, 1940, to Beatrice Wilson and Frank Dewey Leonard. Sararose grew up in Traverse City, graduating from the old Central High School in 1958. She attended Denison University and in the winter of her Freshman year went on a blind date with David Taft. They were married in Traverse City in July 1961, recently celebrating their 60th wedding anniversary.

Sara and David completed their university studies in East Lansing, Michigan and moved to Minneapolis, Minnesota to start their family. Sara was very involved in various volunteer activities in the community. Mainly though Sara focused her love and energy on family, building a sustaining presence of love, joy and family. She needlepointed Christmas tree ornaments yearly for each of her three children and later annually for each of her seven grandchildren. Sara became the matriarch and the counselor to each of her children about their dreams, ambitions and education experiences, this role formally made famous through her annual tea party with grandchildren at her Neahtawanta Home. She also worked for women’s equality and participated actively on many specific assignments in the Junior League of Minneapolis.

In 1983, the family moved to the San Francisco Bay Area where Sara quickly became involved in the Junior League of Palo Alto Mid-Peninsula, Inc. and later with the Institute for Research on Women and Gender at Stanford. She and David traveled extensively to Europe and Asia, often with family to wonderful far off destinations. The most magnificent trip was a total family, including grandchildren, Safari to Southern Africa. On another trip they visited her roots at the Kroupa homestead in the Czech Republic. Sara loved visits to art museums around the world and enjoyed symphony, opera and Broadway.

Sara spent 75 summers and many years in her retirement at her family home at Neahtawanta on the Old Mission Peninsula outside of Traverse City, Michigan. There she tended her locally famous rose garden and developed a love of nature and conservation. She cherished her family farm, growing cherries and apples there. The Neahtawanta Home became the centerpiece for summer vacationing of her extended family of three children, spouses and seven grandchildren, all of whom have developed a love for nature and conservation, a result of Sara’s devotion. With her love of education, literature and books, Sara supported educational scholarships at Michigan State University and locally helped in the formation of the Old Mission Peninsula School. She also participated actively in conservation projects in Northwestern Michigan through the Grand Traverse Regional Land Conservancy.

Sara is survived by her brother, Frank Wilson Leonard and his wife, Carol; her husband David Dakin Taft; her children and their families: Amy Rose and Richard DeLossa and their children Emily Rose and Grace Louise; Kingsley Leonard Taft and Gillien Todd and their children William Dakin, Chloe Elisabeth and Charles Wilson; Elisabeth Taft and John Muhlner and their children Callie Wilson and John Dakin. A celebration of Sara’s life will be held among California friends in the winter and with her Michigan friends with a gathering at Neahtawanta in Summer 2022. Memorials may be directed to the Grand Traverse Regional Land Conservancy, 3860 N. Long Lake Road, Suite D, Traverse City, MI 49684 or the Old Mission Peninsula Education Foundation, 2699 Island View Drive, Traverse City, MI 49686.