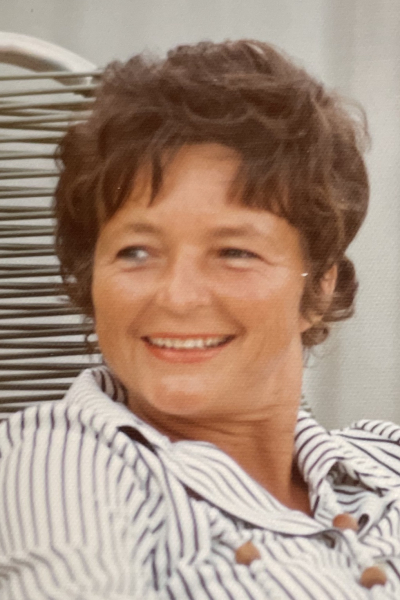 Shirley Stewart passed away peacefully surrounded by loved ones. She was born Shirley Carolyn Cooter to Paul and Jewell Cooter in Oklahoma City. They moved to Kenilworth, Illinois where she was raised before attending Northwestern University. On a cruise to Hawaii with her parents, she met her future husband George Stewart on the S.S.Lurline. At the end cruise they knew it was love at first sight and were married nine months later in Kenilworth. They moved to Atherton where they raised their three children,Todd, Carol, Bill and at least a dozen dogs before moving to Menlo Park.

She had a long career of community service and sat on the boards of all her children’s schools. Because of her love of gardening and flower arranging, she became very active in the Woodside Atherton Garden Club. She was a gourmet cook and loved to entertain using new recipes that had never been tried before which made for very festive conversation. Shirley was a voracious reader and was well known at the Menlo Park Library as she visited every week. She swam every morning at 6:00 am and played golf at least twice a week followed by a bridge game. She never ran out of energy and taught Tai Chi to help balance her busy schedule. Her love of travel took her to over 25 countries and as a member of the Commonwealth Club, she lead many trips including to China in 1973 when it first opened it’s door to the western world.

Shirley had a wonderful sense of humor, a sharp wit and true grace. She was the the matriarch of a loving family for 70 years and imparted her wisdom and humor to all of her children and grandchildren She is preceded in death by husband George and sons Todd and Bill. Shirley is survived by her daughter, Carol, her seven grandchildren, Stewart Silverberg, Wilton Stewart, Elizabeth Stewart, Abigail and Ian Dunckel, Madeline and Ryan Johnson, Kevin and Jordan Bohannon, Ryan Bohannon and two great grandchildren, Carson and Rosalie.

Shirley had a long and fulfilling life that brought happiness to all that knew her. She will truly be missed but our memories are so vivid that she will always put a smile on our faces.