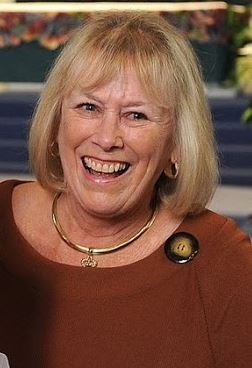 Susan Morey Lambert Mein was born to Jack and Edna Morey on August 17th, 1942 in Atherton. She grew up in the large Morey family and spent much of her time with her numerous cousins. Like many of the Moreys, she attended St. Joseph’s, graduating in 1956, and then went on to graduate from Notre Dame in Belmont in 1960.

From there, she met her husband Michael Lambert of Honolulu when they were introduced by friends. They were married at Nativity Church in 1963 with a reception in her parents’ Menlo Park home.

They welcomed Micaela into the world and then Jeffrey to follow 3 ½ years later. While raising her kids, Sue was active in Peninsula Volunteers as well as volunteering at St. Joseph’s school. Mike and Sue enjoyed going back to Hawaii frequently and enjoyed traveling on cruises with the Morey cousins.

After a long battle with cancer, Mike passed away in 1999. After a period of time, Sue married William Wallace Mein III, of Woodside and Corona Del Mar. The pair welcomed a blended family, combining the Morey-Lamberts and the Mein families. Sue and Bill loved to travel, with an especially memorable trip to the Great Wall of China. The couple spent much of their married life in Freedom, California as well as their home in Menlo Park. Sue embraced the role of grandmother to Bill’s eight grandchildren. After Bill’s passing in 2003, Sue spent most of her time with her family. She loved caring for her youngest granddaughter, Paige Lambert and was overjoyed at the news that Paige will be attending her alma mater, Notre Dame in the fall. She was anticipating the upcoming wedding of her oldest granddaughter, Rachel Mein in the summer. She passed away peacefully on June 15th surrounded by family. She is survived by her daughter Kyla Eller, her son Jeff Lambert and his wife, Dawn, as well as her four step children and nine grandchildren.

In lieu of flowers, donations can be made to Peninsula Volunteers.