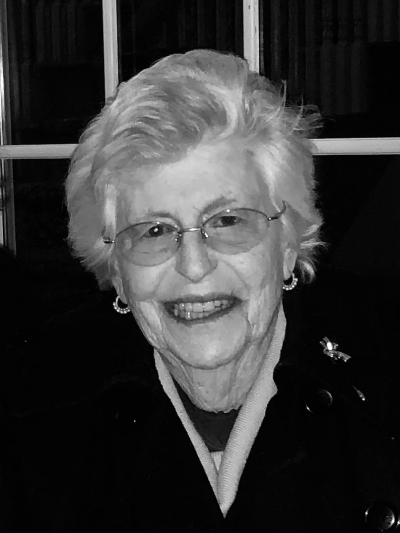 Therese "Terry" Luke Hamilton, - a long-time resident of Atherton, and Redwood City California - passed away peacefully on February 26th, 2021. In the comfort of her home, while surrounded by her family, Terry shed the weight of this world she loved, and stepped into her Lord's promised, vibrant, and eternal kingdom – she was 87 years old.

Terry is survived by Ed - her husband of nearly 66 years - and by her four children: daughters Lindsay and Leslie (Jim), and sons Ian (Kim) and Doug (Dori). Terry is also survived by 10 grandchildren and 8 great grandchildren.

Terry was born in New York, NY to Josephine Therese Buckley and Charles Wilson Luke. At the age of 10, Terry traveled by train with her sister and mother across the country to her new home in San Francisco. It was there that she met a young neighborhood boy nearly her own age, who many years later would become the love of her life, and the father of her four cherished children. After finishing her primary education at Miss Burke’s School, Terry moved across the Bay, and joined the Kappa, Kappa, Gamma sorority at UC Berkeley and graduated with a degree in History.

Terry and Ed were married in August 1955, eventually making their home in Atherton. With four kids in tow and numerous cats and dogs roaming the house, Terry's community interests and service to others along the Peninsula, began to blossom. A member of the Junior League of Palo Alto and the Woodside - Atherton garden club for 40 years, Terry leaned into her volunteer activities with her well-known engaging and inquisitive enthusiasm. With a keen eye for residential plant life - developed over the years with her fellow garden club members - her garden pots at home were always full of vivid color the year round.

As her kids entered their teenage years, Terry earned her license as a real estate agent. She good-naturedly took a healthy dose of teasing from her family, for Terry could often be heard late at night talking to herself in the kitchen as she worked out the nuances of tricky negotiations – a habit she owned during her 25 years of faithful real estate service to the community. Terry was also very fond of traveling. She and Ed were blessed to have had quite the variety of excursions over the years. Whether crisscrossing the US in their home-away-from-home RV, visiting her sister and nieces in Italy, dear friends in Japan or walking the headlands in her adopted home of Mendocino, Terry’s thirst for local culture, history, and a good story, could hardly be contained. But for all her travels and adventures, it was the “others” in her life that always focused her attention. Whether it was the “Save the Bay” campaign or serving as a Lay Eucharistic Minister at her local church, Terry was most at home when she was making phone calls to friends and family both near and far, writing letters and notes of encouragement - always planning and organizing group gatherings. She loved her grandchildren deeply. She thoughtfully and routinely wrote postcards to each one on her trips with Ed. She often could be found playing “go fish” or spoons on the floor with her “grands” over the years, never tiring of their enthusiasm and playful natures. Terry welcomed life and she welcomed people into her life.

As we gathered around her bed on the day of her passing it was noted and affirmed by all, that ultimately, “Mom loved well.” She loved her church, she loved God’s creative beauty of plants and animals and serene vistas. She loved her family with sincerity and passion. And she loved to bring wholeness and goodness to everything she touched. Yes, Terry loved well. You will be missed “Grammy” – yes, you will be missed very much indeed. In lieu of gifts or flowers, please consider giving a donation to the St. Francis Center of Redwood City – an organization with a rich history helping the least of these in our community. Thank you!