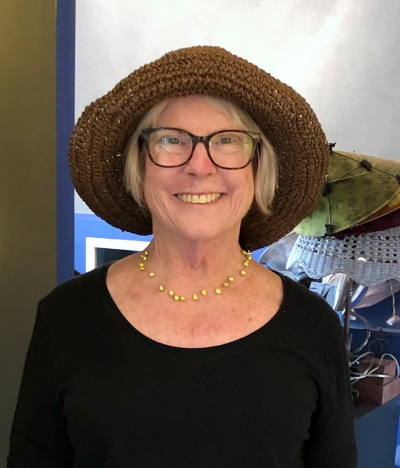 Tina Enomoto was a loving mom, grandmother, daughter, sister, wife and friend, raised by her adoptive parents, John and Susan Spruill as an only child in Piedmont, CA, where she made lifelong friends, as she did everywhere she landed.

With her family based in northern Florida, she spent summers there, developing her early hospitality and storytelling traits, while forging special relationships with her cousins.

Tina attended the University of California, Davis, where she studied sociology while fighting for human rights as a proud hippie. She met her future husband there, Kevin Enomoto, who introduced her to the Japanese American culture that she respected and loved so much, and added dozens more to her extended family.

Tina and Kevin raised two daughters, Elizabeth and Emily, in the Ladera neighborhood of Portola Valley, CA. They later welcomed son-in-law, Paul, and two precocious granddaughters, Harlow and Riva, who carry on her zest for life and slightly wild nature.

For Tina’s 40th birthday, she embarked upon a search for her biological family. Her quest uncovered her mother, Mary Lou Burch, sisters Julie, Carol and Donna, and brother Alan, who all welcomed Tina with open arms.

After 25 years in Ladera, Tina and Kevin separated and her next adventure was to pursue her lifelong dream of becoming an interior designer, and purchasing a small farm in Newberg, Oregon to be closer to family and garden to her heart’s content. She called it Tina’s Barn and built a truly picturesque place that hosted numerous weddings, rotary gatherings, wreath making events, birthday parties, and vast Thanksgiving dinners for anyone who needed a soft place to land.

Her ability to connect with people of all ages, cultures and beliefs was unparalleled. Well-loved by many, Tina lived her life as a servant of her community, giving her time freely, and lending an ear and open heart to anyone in need. She was well-known for striving to provide a peaceful respite for those around her. Nothing brought her more joy than her family, animals and friends.

A memorial service will be held at a later date at her beloved farm.

Photo Gallery
0 photos Upload a photo
Remembrances
0 entries Submit a remembrance
Memorial service
A memorial service will be held at Tina's beloved farm in Newberg, Oct. 2.
About this site     Contact us