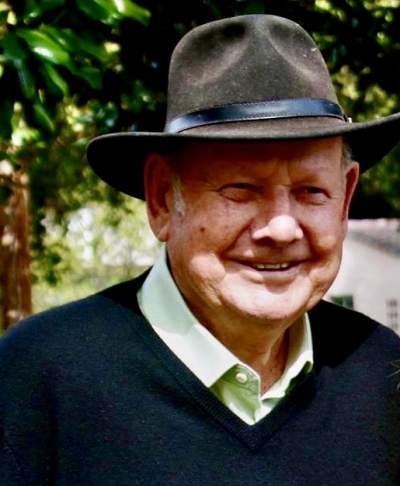 Tom was born in New Hope Arkansas. He grew up on his family farm, milking cows, riding horses and raising prize winning bulls. He became an orphan at eleven, and had to work hard to build a new life for himself. Tom became a contractor at a young age.

Tom was in the national guard. He was ready to ship out during the Korean war, but his General insisted he stay to finish the construction work he had volunteered to do on the Generals office.

Tom and Betty moved to Palo Alto in 1961 and they started Plemons Construction, a successful remodeling business.

He was an avid golfer though to his 90’s. He always looked forward to meeting his golf buddies on the course. He and Betty enjoyed traveling throughout the years to play on many beautiful courses with friends.

Among Tom’s many hobbies was building, refurbishing and driving cars. He rebuilt classic cars throughout the years. He was a member of of several car clubs, and they enjoyed many car trips and parties. He also belonged to the SIR’s, branch 51.

Tom had many accomplishments throughout his life. In the eyes of his family his greatest accomplishment and gift was his generosity and kindness to them all. He would do anything to make his wife happy, even when it meant dressing up in a silly costume to go to a party, or using his skills to build a working toy car from scratch for his grandchildren, and taking his whole family on getaways.

Tom and Betty’s home served as a meeting place for the whole family, where many holidays, weddings, and reunions took place. Tom made everyone feel welcome and special. Many good memories were made in their home, and in their Bear Valley cabin that he built with his son.

Tom is preceded in death by his wife Betty and siblings. Tom is survived by Scott Plemons and Brenda Davis. His four grandchildren, Kelly Davis, Derek Plemons, Jason Plemons and Jordyn Adamson. As well as one great grandchild Riggsden Adamson.

Friends and family describe Tom as level headed, always the gentleman. He exemplified for us strong values of honesty, integrity, kindness & generosity.

He was a beloved and devoted husband, father, grandfather and great-grandfather. He will be greatly missed.